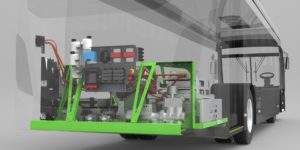 Kleanbus says they developed the retrofit solution called Repower alongside Tier I suppliers but leaves these undisclosed. The company also claims to be able to turn any single or double-deck bus into an e-bus at one-fifth of the usual costs.

To do so, they scan and prototype the vehicle’s interior and design a bespoke platform. Once the custom e-drive was developed and tested, it would take less than two weeks to retrofit a bus, so Kleanbus. They will then “purposefully engineer” each retrofit to fit the former diesel engine space, states their website. However, this has yet to happen in real life.

The company also mentions different ways of financing, from paying upfront and battery leasing to leasing both the vehicle and the battery.

“With 9 % of UK buses powered by diesel engines that emit large amounts of carbon, oxides of nitrogen, and particulate matter – and a staggering 35,000 of them on the road – the country faces a major challenge to rapidly decarbonise this vital transport sector and is struggling to move quickly enough,” co-founder Joe Tighe stated. He said their solution was faster and more cost-efficient.

Kleanbus is based in Scarborough and currently seeks crowdfunding.