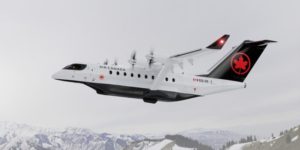 The Swedish electric aircraft developer Heart Aerospace has presented the ES-30, a hybrid-electric regional aircraft for up to 30 passengers. The ES-30 is to be operational from 2028 and achieve a purely electric range of 200 kilometres. A launch customer is already onboard.

Heart Aerospace says that with reserve generators, the aircraft’s range should be able to be doubled to 400 kilometres. The new ES-30 (with the 30 passengers in the name) replaces the ES-19, the previously planned concept for 19 passengers. Orders for a total of 200 ES-19s from United Airlines and Mesa Air have been transferred to the ES-30. Other letters of intent for 96 aircraft (from Icelandair and SAS, among others) have also been transferred to the ES-30. The ES-19 was originally scheduled to take off commercially in 2026, but the company will first hit this target at least two years later with the ES-30.

A dedicated customer who has opted for the larger ES-30 from the start is the Canadian airline Air Canada. The airline has ordered 30 ES-30s and is investing five million US dollars in Heart Aerospace. Another five million dollars is coming from the Swedish aircraft manufacturing and defence company Saab.

Reuters reported that Scandinavian airline SAS is also considering adding an undisclosed number of aircraft for shorter routes in Denmark, Norway and Sweden.

The ES-30 is a shoulder-wing aircraft and is powered by a total of four electric motors. The energy for the electrically driven propellers comes from the battery, the details of which were not revealed. This should be enough to fly for 200 kilometres. The “extended range” of 400 kilometres is achieved via the so-called “reserve hybrid configuration”. Here, two turbo generators powered by sustainable aviation fuel (SAF) serve as a backup during the battery-electric flight but can also be used as range extenders on longer routes. The company claims that with 25 passengers on board, even up to 800 kilometres are possible.

The cabin has three seats per row, a small galley and a toilet. In addition, there are the usual stowage compartments for hand luggage in the cabin, but also a large cargo compartment. This should give airlines the usual flexibility of use.

“The ES-30 is an electric aircraft that the industry can actually use. We have developed a cost-effective aircraft that airlines can use to provide good service on a wide range of routes,” said Anders Forslund, founder and CEO of Heart Aerospace. “With the ES-30, we can start reducing emissions from air travel before the end of this decade, and the market response has been fantastic.”

Heart Aerospace also announced plans to establish an e-aircraft hub at Säve Airport in Gothenburg. The campus, called Northern Runway, will include offices as well as production and flight test facilities. The first phase of the build is expected to be completed by mid-2024 and the first test flights are planned to start in 2026. The company currently has 130 employees and aims to employ around 500 people in 2025. The ES-30 will then also be built at the facility.

In early 2020, we reported that Swedavia, the state-owned Swedish airport operator, has adopted a strategy for electric aviation. The aim in 2020 was to prepare all ten airports in Sweden for electric-powered aircraft and to have the first commercial electric airline operating by around 2025.