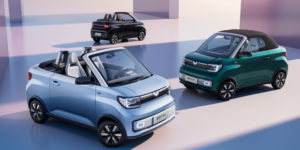 The SAIC-GM-Wuling joint venture is launching a convertible version of the all-electric Hong Guang Mini EV in China, which is extremely popular there. The Mini EV family of microcars has been ranked number one in China’s electric car sales rankings for 24 months in a row.

According to a statement by joint venture partner General Motors, the Wuling Hong Guang Mini EV Convertible will be launched for 99,900 yuan – currently equivalent to just under 14,500 euros. It has a maximum output of 30 kW and 110 Nm, a speed of up to 100 km/h and a range of up to 280 kilometres according to Chinese standards. Acceleration is given by the manufacturers as eight seconds from 0 to 50 km/h. The two-seater is long and has a low weight.

The two-seater has a length of 3,059 mm, a width of 1,521 mm, a height of 1,614 mm and a wheelbase of 2,010 mm. About two-thirds of the body is made of high-strength steel. The Mini Convertible has a folding soft top and is available in three exterior colours (blue, green and black) and two soft top colours (red and black). The standard equipment also includes two airbags, automatic locking, anti-lock braking system (ABS) and electronic brake force distribution (EBD).

With its technical performance data and dimensions, the Wuling Hong Guang Mini EV Convertible is apparently based on the version of the small car that was revised last year. At that time, the power increased from 20 to 30 kW, the wheelbase from 1,940 to 2,010 mm and the battery capacity to 26 kWh (instead of 9 or 14 kWh) – although the latter has not been confirmed for the convertible.

The Mini EV family of subcompact cars has been ranked No. 1 in China’s electric car sales rankings for 24 months in a row. In total, more than one million units have already been sold since its launch in July 2020. According to GM, the vehicle family is particularly popular with the younger generation in China.