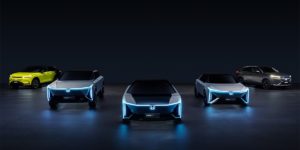 Automotive supplier Hitachi Astemo has been contracted by Honda to manufacture electric axles for the carmaker’s medium and large battery electric vehicles from 2026. At the same time, Hitachi Astemo is aiming to additionally expand its electrification business.

As a system integrator, Hitachi Astemo is to supply a high-performance, integrated drive unit for Honda. According to the supplier, the e-axle system combines a silicon carbide inverter, a low-loss and efficient motor and a compact transmission from an external manufacturer. Neither company has yet revealed the intended vehicle’s performance data or which vehicle models that are to get the Hitachi E-axis.

Hitachi Astemo was formed in 2021 from the merger of Hitachi Automotive Systems with Honda’s Keihin, Showa and Nissin Kogyo groups. The company says it is responding to the fast-growing demand by expanding sales of its in-house developed electric axles to various carmakers worldwide. The company will also supply motors and inverters for e-axles assembled by car and transmission manufacturers.

Including research and development, Hitachi Astemo aims to invest 300 billion yen, which is around 2.1 billion euros, specifically in the area of electrification, including R&D, by the 2025 financial year. The investments are expected to pay off soon thereafter: For the 2025 fiscal year, sales of electric components are expected to reach 400 billion yen (2.8 billion euros) and more than double this amount by 2030.

Although Honda has not yet confirmed the models that will be getting Hitachi Astemo electric axles, in April this year, the Japanese company announced that they would be using three new, purely electric platforms for their upcoming electric models. So far, the carmaker has only revealed that an electric model based on the new “large” platform is expected to be launched in North America in 2026.

Honda plans to launch 30 electric models globally by 2030. Not every electric car model will be offered globally since Honda has very different vehicles on offer in the respective regions of North America, China, Europe and its home market of Japan. Honda wants to achieve a sales volume of more than two million electric cars per year by 2030.

New BMW iX1 and base i4 variant to release in November

Mercedes to release the electric G Class in 2024