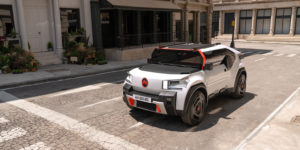 Citroën wants to buck the trend toward heavy, huge, and expensive electric cars for families. So, here comes Oli (pronounced: all-ë), a friend to the Ami EV and an electric concept car that only looks like a compact SUV but is much lighter.

In 2020, Citroën already went a completely different way than most of its competitors with the extremely slimmed-down Ami, a light electric vehicle. Now, with four seats and dimensions of 4.20 m in length, 1.65 m in height and 1.90 m in width, the Oli is, in a way, a family-friendly evolution. Important to distinguish: While the Ami is on the market, the Oli is a concept that will not go into series production in this form one-to-one.

“Oli is a working platform to explore ingenious ideas that are realistic for future production,” comments Laurence Hansen, Director Citroën Product and Strategy. “They won’t all come together, nor in the physical shape you see here, but the high level of innovation being showcased is inspiring future Citroëns.”

Citroën revealed just what those innovations are at a press event in Paris today. But first, let’s start with the performance figures: The Oli’s all-electric powertrain requires only a 40 kWh battery to give the relatively lightweight vehicle a range of up to 400 kilometres. There are no details about the e-drive train itself in the French announcement. Only this much: by limiting the top speed to 110 km/h to maximise efficiency, a consumption of 10 kWh/100 km is realistic, Citroën informs. Charging the battery from 20 to 80 per cent should take 23 minutes.

One of Oli’s areas of experimentation is bidirectional charging. It is V2G- and V2L-capable and, according to the company, can theoretically power an external 3,000-watt electrical appliance for around 12 hours with a socket output of 3.6 kW (the equivalent of a 230 V 16 amp household socket).

The angular and unusual silhouette of the flat bonnet, straight roof and rear cargo area is due to the fact that Citroën strives to reduce material, complexity, parts, weight and costs. They stress that in the Oli, “aesthetics have been deliberately exaggerated” in order to enhance functionality and versatility.

Large parts of the concept car’s body are made of recycled corrugated cardboard, moulded into a honeycomb structure between glass-fibre reinforcement sheets and coated with a special synthetic resin and spray system. Citroën partnered with BASF to develop this material. “The panels are very rigid, light and load-bearing – so load-bearing that an adult can stand on them. The weight is reduced by 50% compared to a corresponding steel roof construction, they say.

Instead of aerodynamics (“people who drive this kind of vehicle don’t drive at 200 km/h”), the developers also paid attention to low material consumption and less solar radiation in the windscreen due to its vertical design, which “can reduce the power requirement of the air conditioning system from the oli by up to 17%”. To increase efficiency, the electric concept has an experimental “Aero Duct” system between the front part of the bonnet and the flat cover plate, which blows the air towards the windscreen, creating a curtain effect that directs airflow across the roof.

In the cockpit, the Oli features a single symmetrical dashboard that houses the steering column and wheel on one side, a smartphone docking station on the other and five toggle switches for the air conditioning in the centre. All infotainment is to be done via the user’s personal smartphone. “We all have our phones with us and already use apps for navigation and entertainment, so we saw an opportunity to save the duplication and weight of integrated systems,” the company explained.

“Citroën believes that electrification should not be expensive and that environmentally conscious behaviour should not be by limiting our mobility or by making our vehicles less attractive,” sums up Citroën CEO Vincent Cobée. “We need to reverse the trends by making vehicles lighter, cheaper and finding inventive ways to maximise usage. Otherwise, families will no longer be able to afford the freedom of mobility if all-electric vehicles become the only option for them. The Oli is an impressive demonstration of how Citroën is meeting these conflicts with optimism.”

Before Oli, the idiosyncratic and uncomplicated Ami was already an important step in this direction, says the manufacturer, while other electrified and fully electric Citroën models such as the ë-C4 and the new ë-C4-X, as well as light commercial vehicles such as the ë-Berlingo and the ë-Spacetourer, are more in line with the common image of classic vehicles.