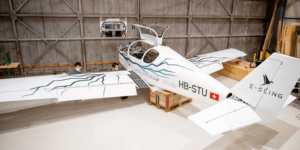 An electric aircraft called e-Sling has managed its maiden flight at Dübendorf airfield in Switzerland. Developed by students at ETH Zurich, the four-seater plane with roots in Africa carries a unique propulsion system designed in Zurich, enabling battery swaps during stopovers.

A kit for small aircraft from the South African manufacturer Sling Aircraft served the e-aeroplane as a shell. The students assembled the equipment with a few adjustments and equipped the plane with their zero-emission technology. In addition to an efficient electric drive, pictures show one propeller, they developed a modular battery system with a unique cooling system. The batteries are designed to be swapped during a stopover, although this currently takes longer in practice.

The modular battery system that took off on the maiden flight was 44 kWh, with the students claiming energy density as 196 Wh/kg. The built-in electric motor has a maximum output of 110 kW. ETH specifies a cruising speed of 185 km/h, nearly 100 knots.

The team completed the conversion within a few months; however, the drive development took two years with a group of over 20 people, according to the university, which includes the preparations.

As for readying the e-Sling for take-off, the students worked “tirelessly” in a hangar in the Innovation Park in Dübendorf, according to the project website.

The African roots in the plane’s body are also not incidental. Rather than carrying passengers in future, the team envisions the silent aircraft cruising above National Parks to help count and protect animal populations.

The ETH Zurich team also wants to develop a hydrogen-powered system for their electric aircraft to increase the range beyond 180 kilometres. However, this will be down to a new group of students since e-Sling is a “focus project”. As part of such projects, Bachelor students of mechanical engineering at ETH Zurich independently develop a product, also helped by industry sponsors. In the case of e-Sling, the previous year’s students hand over the project to a new group of students each year. The e-Sling is now in its third year.

As aviation goes electric, how do you ensure safety and expedite regulation?