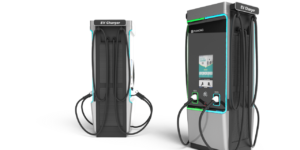 Zerova Technologies, founded by Taiwan’s Phihong, made its European at the eMove360° Europe show in Berlin. The company presented a prototype 480-kW charger that promises to charge up to four EVs in ten minutes.

Zerova will offer the new charging station as a standard version with 360 kW and 480 kW extended. It is currently called Four Gun due to its four cables. However, interested parties must be patient since the company won’t launch before late 2023.

At the same time, speaking to electrive.net in Berlin last week, Zerova let on that they plan a roll-out beyond Germany and as far as North America via Europe.

Patrik Ott, VP of Business Development at Zerova, added that any expansion would come in close collaboration with customers “to deliver flexible solutions that adapt to the specific needs of end users, regions and locations.” He said this would help accelerate the adoption and diffusion of purpose-built charging stations for electric vehicles worldwide. Ott also stressed when speaking to us that parent company Phihong is very familiar with charging: from tablets to e-bikes to shavers, the company produces millions of chargers for electrical devices. Zerova could benefit from this know-how and the production network, so the VP.

Regarding the new charging station on display in Berlin, Zerova says this was the fourth generation of the device and that it can charge up to four vehicles – both passenger cars and commercial vehicles – simultaneously. Specifying the stated aim, vehicles shall “fully charge in ten minutes and for a range of 150 km in less than five minutes”. Note, though, Zerova bases the 10-minute full charge on a vehicle with a 75-kWh battery pack, so cars with larger batteries would take longer.

Once in production, the Four Gun will support CCS-1, CCS-2, CHAdeMO and GB charging standards, another nod to the international target markets. V2G capability is envisioned. The charging station made a high-quality impression at the trade fair.

As for a roll-out, production targets remain undisclosed. However, Zerova again points to Phihong’s presence in the European market for DC and AC chargers for more than five years. They also claim partnerships with Audi, Jaguar, Shell and Helsinki Bus.

In future, Zerovia wants to produce charging solutions for business and residential clients ranging “from mobile chargers to charging stations to large-scale charging infrastructures and hubs.”