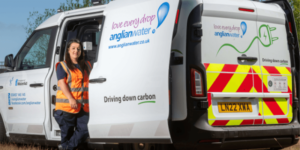 The water service company Anglian Water is accelerating its e-mobility advance, with more than 300 electrified vehicles coming to the East of England in the next few months. Almost 300 vehicles are on order and will join an existing fleet of electric and hybrid vans.

Anglian Water, with a service area covering about a fifth of England and Wales, already has 33 Opel/Vauxhall Vivaro-e vans in the fleet. According to the latest news, the fleet will grow by another 43 all-electric vans and 60 LEVC VN5 models with range extenders.

Anglian Water is also expanding its fleet of company cars. It currently comprises 182 EVs, and a further 112 are on order, with 40 due for delivery by the end of this year. The company made no statement on the type of vehicle it purchased.

The company is also installing more than 120 new charging points at its sites in the East of England and Hartlepool. At some locations, these will be powered by renewable energy generated by Anglian Water through combined heat and power or solar and wind.

The company’s net zero route map launched in 2021 will see 90% of small vehicles replaced with electric equivalents, medium-sized vehicles moved to hydrogen or alternative fuels, and 55% of HGVs using liquefied natural gas by 2030.

Mick Farmer, head of fleet services at Anglian Water, said travelling was “essential” for their teams. “But traditional petrol and diesel engines produce a significant part of our carbon emissions every year – so going electric offers an exciting opportunity to build a sustainable future while continuing to do what we do best.”

In May, the company also launched a salary sacrifice scheme through Tusker, which allows employees to lease an electric car for a fixed monthly amount taken directly from their gross salary.