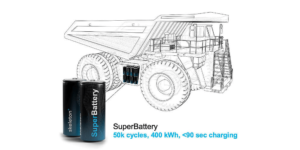 Shell envisions working with the nine-member consortium to create battery solutions for off-road vehicles that can be charged quickly and combined with a microgrid energy system. This “pilot offering” will support different OEM brands and models and will be modular so that each customer can get a solution tailored to their own needs.

“It is increasingly clear that no one, single organisation can solve decarbonisation alone,” said Grischa Sauerberg, Vice President, Sectoral Decarbonisation & Innovation at Shell. “The need for a collaborative effort is particularly evident within carbon-intensive industries like mining, where the challenges are great but the opportunities are even greater.”

According to Shell, in the near future, the energy supply for mining vehicles will be ensured via microgrids that generate renewable electricity on site – which can be coupled with the option of using electricity from the grid where this is available. The charging process itself is to take only 90 seconds via charging stations on site using Skeleton’s “SuperBattery” technology.

The challenges involved for zero-emission vehicles in mining applications is that they are often in remote locations with little grid infrastructure. For this reason, either microgrids or onsite hydrogen production for fuel cell vehicles becomes a good option. The advantage is that these remote locations often have ideal conditions for renewable energy generation, such as a lot of sun and space for photovoltaics.

The Estonian company Skeleton is generally known for its supercapacitors, but for these mining applications, the consortium is to receive a novel combination of battery and capacitor technology that links both technology paths. These hybrid storage systems will combine the advantages of lithium-ion batteries (high energy density) with the advantages of ultracapacitors (high performance, long service life).

Skeleton’s SuperBattery” is based on a patented curved-graphene material and is currently being used and tested primarily in electrified vehicles such as buses and trucks as well as in charging infrastructure. Shell is the first major customer for the new hybrid product. Mass production is scheduled to begin in 2024.

“Over the next 7 years, the mining sector represents a multi-billion revenue opportunity for Skeleton,” says Taavi Madiberk, co-founder and CEO at Skeleton Technologies. “Skeleton is focused on reducing emissions in hard-to-decarbonize sectors. But we cannot achieve it alone, we can only do it with partners. Close collaboration with Shell is key for us, with potential going way beyond mining applications.”

In Germany, Skeleton Technologies has been working primarily on hybrid energy storage systems at its plant in the town of Großröhrsdorf. the first of two plants that the company has in the state of Saxony. This endeavour has been funded by the German Federal Ministry of Economics and Technology as part of the second Battery IPCEI. In the summer, Skeleton announced its intention to build another production facility near Leipzig with the support of Siemens.