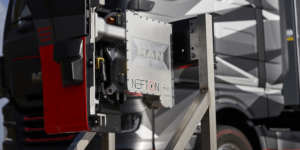 In Germany, the NEFTON project launched in 2021 to develop charging scenarios for heavy battery trucks based on the Megawatt Charging System (MCS) is now being expanded. The consortium around the Technical University of Munich is now focusing on charging capacities of up to 3 megawatts.

The expanded project will now involve the testing charging currents of 3,000A, which will allow an electric truck battery to be fully charged in 15 minutes. In order to achieve this goal, a test stand is now being built that will map all components from the charging plug to the battery in the vehicle.

The abbreviation NEFTON stands for “commercial vehicle electrification for transport sector-optimised grid connection”. Project participants want to enable electric trucks to charge during the day at high charging power during short stops rather than having to be charged overnight at the depot.

In addition to the Technical Universit of Munich (TU Munich), the partners involved in NEFTON are MAN Truck & Bus, AVL Software and Functions, Prettl Electronics, the Forschungsstelle für Energiewirtschaft e.V. and the Technische Hochschule Deggendorf. The project is funded by the German Federal Ministry for Economic Affairs (BMWi).

By 2024, the consortium partners expect charging capacities of up to one megawatt in real-world operation, which would allow a truck’s battery to be fully charged during the drivers’ mandatory 45-minute driving break.

“One megawatt charging capacity will be easy to achieve with the vehicles and the charging technologies of the near future, but that won’t be enough for the rapid integration of battery-electric commercial vehicles on a large scale. At three megawatts we can achieve charging times of about 15 minutes, so that intermediate charging will hardly result in any limitations. However, in terms of technology we’re entering completely uncharted territory,” says Prof. Markus Lienkamp of the TUM Chair of Automotive Technology.

When large vehicles charge with one megawatt, they use an operating voltage of approximately 800 volts and a current of 1250 amps. If, however, the vehicle is to be operated in the three-megawatt range, it will need a full 3000 amperes at 800 volts. The consortium explains that for some components, this means a complete change of technology. For example, electrical currents beyond 2000 amperes in the automotive sector can no longer be transported by classic cables. Here, NEFTON is researching busbars, among other things. The project partners also see a need to rethink fuse protection – up to now, mechanical switches have been used in the event of faults.

“Charging at three megawatt has a direct impact on the vehicle, the charging technology and the entire power grid. We’ll be using new technologies for many components along the charging path. In several areas today we don’t even know what these technologies will look like. Here the new test bench establishes ideal development and optimization conditions,” says Prof. Malte Jaensch of the TU Munich Chair of Sustainable Mobile Drivetrains.

According to TU Munich, since the start of the project last year, the focus has been on developing an overall system (vehicle and infrastructure side) that functions on the basis of the MCS standard. To this end, the consortium has realised the integration of stationary buffer storage, as announced, through which an expensive grid expansion can be avoided. “In addition, thermal management in the vehicle itself has already played a decisive role up to now. The approaches already researched will now be further developed with the next stage of the project,” it says.

Another aspect that has been important since 2021 is that the charging stations are to function bidirectionally so that trucks that are parked for a longer period of time in the car park of a haulage company, for example, can act as storage for renewable energy or for grid balancing for uneven periods of demand.

In China, the problem of quick charging for very large vehicles is additionally solved with another method that is already being rolled out there: battery-swapping for trucks. Battery swapping stations and charging infrastructure are not mutually exclusive: both can be used so that drivers may charge quickly at some stops and swap out batteries to upgrade or renew the batteries at others – provided the trucks themselves have the compatible technology and battery structure. So far in Europe, with the exception of Nio cars, battery-swapping stations have been slow to gather traction. With battery swapping stations, the stations themselves become grid-balancing entities (for intermittent renewables or uneven demand) rather than the vehicles or, potentially, in addition to the vehicles.