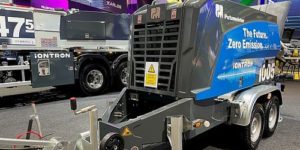 Strictly speaking, the concrete pump is not a fully-fledged electric vehicle with battery-electric vehicle drive, as it is merely a towable trailer. Nevertheless, the Putzmeister BSA 1005 Iontron has a battery-electric drive from Deutz, which replaces the 2.2-litre diesel engine previously used. The 360-volt drive system from Deutz has an output power of 40 kW with a peak power of 80 kW at points. The power comes from two installed lithium-ion batteries, which provide an operating time of up to eight hours – independent of the power grid.

However, if the concrete pump is needed for longer than eight hours, it can also be operated with a charging cable – whether this is the CEE-32 connection commonly used on construction sites is not mentioned by Deutz in the communication. On the other hand, it is clear that partner Putzmeister intends to build the electric concrete pump with Deutz drive in series from next year.

The all-electric CC 1485 crawler crane from Maeda, which was also exhibited at Bauma, also works with the 360-volt drive system from Deutz. With an output of 40 kW, the emission-free construction site vehicle has a lifting capacity of six tonnes. The 360-volt drive system is also used in the Morooka track dumper MST-700VDRe with a payload of four tonnes. The electric mini-excavator KTEG ZE20, on the other hand, uses the 48-volt system from Deutz and has a power output of 10 kW.

“We are focused on enhancing our conventional engines and alternative drives to ensure that they meet our customers’ requirements,” says Markus Müller, Chief Technology and Sales Officer at Deutz AG. “Electric drive systems from E-DEUTZ offer our partners a straightforward and affordable way of eliminating emissions. Alongside the electrification of aircraft tugs, excavators, and dumpers, the concrete pump represents an important addition to our range of electric applications.”