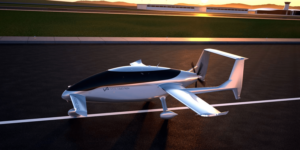 French startup VoltAero has raised another 32 million euros in capital. The Italian company Tesi (Tecnologie E Servizi Innovativi) became a strategic investor and industrial partner in the Series B financing round.

VoltAero will use the money to finance the certification and start of production of its hybrid Cassio 330 aircraft. Tesi will produce the airframe for VoltAero’s Cassio 330 prototype, which is scheduled to make its maiden flight in 2023, VoltAero has now announced.

“Tesi’s decision to become both a strategic investor and industrial partner is a clear sign of the credibility of VoltAero’s technology and business model, as we take this important step closer to reality for the Cassio family of aircraft with this Series B financing round,” said Jean Botti, CEO and Chief Technology Officer of VoltAero.

The maiden flight of the Cassio hybrid aircraft already took place in 2020 – but it was an earlier prototype. The new prototype is expected to match the later production design. The certification process was started in October 2021, but has not yet been completed.

The maiden flight planned for 2023 is to take place with the Cassio 330, a 330 kW hybrid aircraft with five seats – one pilot and four passengers. According to earlier announcements, the larger and more powerful Cassio 480 (for six passengers) and Cassio 600 (ten passengers) versions are planned for later.

The VoltAero aircraft – as can be seen from the pictures – is not a converted aircraft, but a completely new development. Characteristic of the Cassio aircraft is a hybrid propulsion system with pusher propeller sitting at the rear of the fuselage. The slender fuselage has fixed auxiliary wings at the front, called canards, and a wing set to the rear with double booms supporting a raised horizontal tail unit.