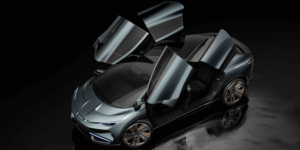 With Aehra, a new premium electric car brand from Italy announces itself with a preview of its first model. Based in Milan, Aehra released pictures of a still unnamed SUV model positioned in the luxury segment.

The Aehra EV is to produce between 550 and 600 kW and offer a range of over 800 kilometres. In terms of price, the company’s first electric vehicle will be in the range between 160,000 and 180,000 dollars. For February 2023, Aehra also announced the presentation of a second model in the form of a sedan. Both models are to be available from 2025.

Aehra hardly comments on the technology of the vehicle on the occasion of the presentation of the exterior design. The SUV is to be about 5.10 metres long, around two metres wide and 1.64 metres high – with a wheelbase of three metres. The weight is supposed to be less than two tonnes. While it hardly gives any details about the battery (apart from the range target of more than 800 kilometres) and the drive, the tyre dimensions are already fixed in detail: 285/35 R23 are to be fitted at the front and 285/35 R24 at the rear.

In fact, Aehra does not even specify whether it is a self-developed platform or an electric chassis design from a supplier or contract manufacturer – there would be various solutions on the market. In an interview with the Swiss publication Automobil Revue, Aehra founder and CEO Hazim Nada provided some more detailed information. For example, the battery is to have a maximum capacity of 120 kWh – which puts the vehicle roughly on a par with the revised Audi Q8 e-tron, which now has 114 kWh (and 600 WLTP kilometres for the Sportback).

As a result, Nada says the focus has been on aerodynamics and efficiency from the outset. “We wanted to prove that there can be aerodynamically shaped SUVs that don’t have to look as boring as today’s bodies without sacrificing interior space,” says the CEO. “The most important aerodynamic point in the front of the vehicle is the angle between the windscreen and bonnet, which we have almost completely eliminated by developing a monobody SUV.”

This layout at the front was also an important criterion in the design: according to Nada, there is a new platform for the vehicle. “For the electric platform, there are already many third-party suppliers offering ready-made solutions. But in our case, the bulkhead is clearly shifted to the front, which is not compatible with most architectures,” the company founder is quoted as saying. Since he also refers to an “ecosystem of manufacturers of subcomponents such as electric axles or battery manufacturers who also offer the entire battery management system at the same time”, it is obvious that Aehra designed the vehicle platform itself with such components.

Instead of such details, Aehra focuses in the current announcement on putting the independent design in the foreground – here the “groundbreaking” SUV sets “new standards for automotive design”.

Specifically, a radically low front and exceptionally short overhangs at the front and rear are cited. This should distinguish the SUV “fundamentally from the design of all other vehicles on the market today”. Narrow and elongated LED headlights are said to make the front striking, while additional LED light strips also accentuate the outer edges of the lower air intakes, do the company.

“Every single element of the SUV personifies AHERA’s unwavering determination to defy modern, mass-market automotive convention, while holding steadfast to the pure values of classic Italian design,” the company is very confident in its future product.

This also applies to chief designer Filippo Perini. “With the SUV, we have created a vehicle that goes far beyond the conventional standards set by the automotive industry for an SUV, and sets new benchmarks for style and comfort,” says Aehra’s Chief Design Officer. By the way, the SUV was not in the wind tunnel, the aerodynamics were only simulated on the computer.

Aehra founder and CEO Hazim Nada did state that the SUV will use “ultra-modern EV technology” and “intelligent manufacturing technologies”. However, Nada did not give any details about the technology, nor does he mention the manufacturing location or partners.