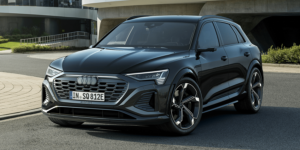 Audi has presented the revised e-tron quattro and at the same time renamed the electric model the Q8 e-tron or Q8 Sportback e-tron. In addition to visual refreshes, the new edition comes with an optimised drive concept, better aerodynamics, higher charging power and battery capacity.

The new features also increase the WLTP range to up to 582 kilometres in the SUV and up to 600 kilometres in the Sportback. Basically, the technical basis of the model remains the same: despite the name change, the Q8 e-tron is based on a further developed version of the MLB evo combustion engine platform. Only the successor, which will also be built at the Brussels plant from 2026, will be based on a purely electric platform with PPE.

Despite the almost unchanged performance data, there is one change to the drive: Audi remains true to the asynchronous motor concept, but has changed the design of the machine on the rear axle from twelve to 14 windings. With the same current input, the motor generates a stronger magnetic field, which in turn ensures a higher motor torque. If this is not called up, the electric motor requires less current to build up torque. This reduces consumption and increases the range.

The most noticeable change, however, is in the battery: the 71 kWh gross (64.7 kWh net) version previously fitted in the e-tron 50 quattro has been dropped without replacement. Instead, the Q8 50 e-tron is fitted with a further developed version of the 95 kWh battery from the 55 model – although the usable net energy content increases from 83.6 to 89 kWh. This means a significant upgrade for the 50 and a range of 491 kilometres (SUV) or 505 kilometres (Sportback). This also gives the 50 the charging power of 150 kW and the still unique charging curve with extremely constant progression.

The Q8 55 e-tron and the SQ8 e-tron get a new battery version. This offers 106 kWh net with 114 kWh gross. The charging power for this battery is 170 kW, but obviously also with the known constant progression: Audi quotes a charging time of 31 minutes from ten to 80 percent – this corresponds to an average charging power of 144 kW. On the AC side, it remains at 11 kW in the standard version and 22 kW as an option. Since the battery is larger, the AC charging time increases accordingly to 11:30 hours with 11 kW and six hours with 22 kW. In addition, the Q8 e-tron is equipped with Plug&Charge as standard.

According to Audi, the redesign of the body focused on aerodynamics. For the Sportback, the cW value was reduced from 0.26 to 0.24, for the SUV from 0.28 to 0.27. This was achieved through several small measures, such as wheel spoilers placed on the underbody or an electric louvre on the radiator grille, which controls and optimises the airflow at the front depending on cooling requirements.

These changes to the aerodynamics are also reflected in smaller updates to the design. The front is recognisably different, but the large, combustion engine-like front grille remains. The basic shape of the headlights is retained, and there are also minor changes to the side view and the rear. The positioning of the charging port near the driver’s door also remains the same. The speculated change to a large touchscreen in the interior has not been made by Audi; there are still two separate units for infotainment above (10.1 inches) and climate control below (8.6 inches).

This also means that the base model of the Q8 e-tron is considerably more expensive than the previous e-tron 50 quattro. However, this is immediately put into perspective due to the fact that the base model now has a larger usable battery than the model with the highest range to date.

In practice, the base prices are unlikely to remain the same. Because Audi has changed little in the scope of the surcharge list. Many features still cost extra, and the vehicle can also be visually customized with various paint, wheel and interior options. An indication of the scope: The PDF price list – including numerous photos – is an impressive 128 pages long.

Prices for the SQ8 e-tron are not yet known, and the S model is not yet listed in the configurator.

NEV registrations remain at record high in China over October