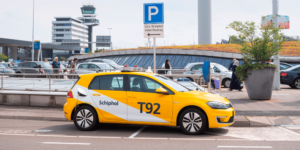 Royal Schiphol Group plans to install 10,000 charging stations for electric vehicles at its airports by 2030. The Dutch airport operator has already completed the tenders awarding the project to local companies Ecotap and FIMIH.

Royal Schiphol Group says the initiative will “significantly increase capacity” for EV charging, first adding to the 400 EV charging points already in place at Amsterdam Schiphol Airport. The new charge points will also benefit airports in Rotterdam, The Hague, and Lelystad, managed by the Group.

The announcement leaves open how the charging stations will be distributed among the four airports. However, it can be assumed that the majority will be located at AMS in the Dutch capital due to the relevance and passenger numbers.

Ecotap and FIMIH will be in charge of the installations. FIMIH also took Maxem on board to provide a CPO platform for smart charging management, including a link to Schiphol airports’ solar panels.
Ecotap has been a charging system manufacturer with a range of AC and DC charging stations since 2011 and produces the hardware and software, yet the partners did not mention what type of charging stations they will roll out.

RSG expects the new infrastructure to primarily supply electric cars; for example, Schiphol has had nearly 200 Tesla taxis on site since 2014 and says the new project will “significantly increase capacity in the coming years” for such users. However, the Group’s new charging infrastructure will also benefit electric trucks, buses and ground-handling vehicles.

The EV investments will contribute to the objective “to operate the most sustainable airports in the world”, so Royal Schiphol Group, adding that “charging stations are key to achieving emission-free airports by 2030”.

RSG does not mention external funding or the investment they are willing to make.