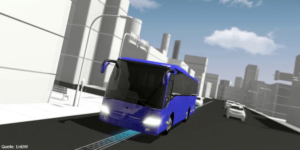 The Israeli company ElectReon Wireless, which specialises in inductive charging of electric vehicles, and the road construction company Eurovia are planning a joint project in Germany. In northern Bavaria, a short section of motorway is to be equipped with the inductive charging solution.

ElectReon and Eurovia had signed an agreement in 2020 to build wireless electric road systems in Germany, France and Belgium. Specifically, this involves a project funded by the German government called E|MPOWER. Launched in July 2022, this project aims to integrate ElectReon’s wireless Electric Road System (ERS) technology on a one-kilometre section of a motorway in northern Bavaria.

ERS is one of ElectReon’s core technologies: with the inductive charging solution, both stationary and moving vehicles can be supplied with energy without contact. In previous projects, such as a special test track in Italy, both electric buses and electric cars were charged. How the system in northern Bavaria is to be designed and what kind of energy transmission is to be possible is not made clear in the press release.

However, the project in northern Bavaria will not be the first ERS system in Germany: Last year, ElectReon built an inductive electric bus charging solution for EnBW in Karlsruhe. The current project will not only demonstrate the technology on a larger scale, but also implement it with new construction techniques to reduce construction costs and duration.

To improve the scalability of Electreon’s ERS, several partners have joined forces in a consortium consisting of the Institute FAPS of the Friedrich-Alexander University Erlangen-Nuremberg (FAU), the Institute ELSYS of the Nuremberg University of Technology, Risomat GmbH & Co.KG and VIA IMC GmbH.

“The E|MPOWER project is a major step toward decarbonizing transportation in Germany and, ultimately, the world,” says Andreas Wendt, Managing Director of Electreon Germany GmbH. “We look forward to collaborating with the consortium partners and joining forces with our partners from Eurovia following our past successful projects. Together with the consortium, Electreon is charging forward towards mass production and deployment capabilities.”

Connected Kerb to rollout charging with EVX in Australia