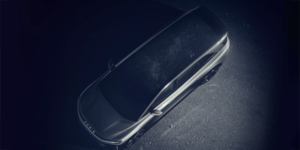 The US electric car manufacturer Lucid Motors has given a preview of its second model, the Gravity SUV. In addition to some pictures, there are also first concrete statements about the concept. Lucid is also launching further variants of its Air sedan.

First, the Gravity: It will be a luxurious electric SUV with either two or three rows of seats and room for five to seven adults. The pictures show that the roofline hardly slopes down towards the rear and that the rear window also appears to be relatively steep. Both of these factors speak for good interior space – so that two adults can also travel well in the third row of seats – but worsen the aerodynamics.

Although at least at the rear, airflow was apparently not a top priority in the design, the Gravity is said to offer “more range than any other electric vehicle (except those from Lucid)”. The Californians are not yet giving any technical data.

In terms of design, the Gravity is recognisable as a Lucid from the front – the proximity to the Air electric sedan is clear, despite the SUV borrowings. However, there are not many details about the body yet. The pictures show a large glass roof, but it is interrupted by longitudinal and transverse beams. The only interior view shows comfortable reclining chairs with apparently fold-out leg rests.

More info is to be released when reservations open in early 2023. The Lucid Gravity will be available from 2024.

“Gravity builds upon everything we have achieved thus far, driving further advancements of our in-house technology to create a luxury performance SUV like none other,” says Peter Rawlinson, CEO and CTO of Lucid Group. “Just as Lucid Air redefined the sedan category, so too will Gravity impact the world of luxury SUVs, setting new benchmarks across the board.”

Meanwhile, Lucid is expanding the range for its first model, the Air electric saloon. The Air Touring, now shipping to customers, features a 462 kW all-wheel drive system with two motors, accelerates from 0 to 60 mph in 3.4 seconds and offers an EPA range of 425 miles. It is Lucid’s most efficient model to date.

The Air Pure, a new base model, is also scheduled to launch later this year with 358 kW of all-wheel drive, acceleration to 60 mph in 3.8 seconds and an EPA range of 410 miles. From next year, the Air Pure will also be available with single-engine rear-wheel drive.

Mercedes has lowered prices for the EQE and EQS in China