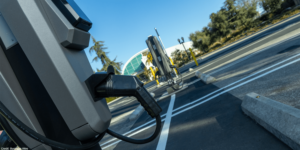 In the USA, the California Public Utilities Commission (CPUC) has adopted a five-year, statewide, $1 billion transportation electrification program. This encompasses funding for charging facilities for both heavy and light-duty vehicles.

The CPUC has the task of regulating services and utilities to protect consumers, safeguard the environment, and assure Californians’ access to safe and reliable utility infrastructure and services. Since emissions disproportionately come from commercial vehicles, charging for medium-and heavy-duty vehicles accounts for 70 per cent of the funds, while 30 per cent will go towards light-duty charging at or near multi-unit dwellings. The developed funding structure prioritises investments in charging infrastructure for low-income, tribal, and underserved utility customers.

The program functions through the provision of rebates for customers (“behind-the-meter”). At the same time, EV infrastructure investments will be made at commercial, industrial, and residential sites beginning in 2025. To ensure that charging infrastructure reaches hard-to-reach communities, the funding provides higher rebates for projects in underserved, disadvantaged, and tribal communities.

Governor Gavin Newsom noted on the adoption of the program, “This $1 billion investment will continue building out the state’s charging infrastructure to make the transition to electric vehicles easier than ever.” He mentioned the Californian $10 billion package already enacted to build out infrastructure, which had the goal of making it more affordable for Californians to transition to electric vehicles. “These collective efforts are exactly how we will make our zero-emission transportation future a reality, cutting pollution and driving economic opportunity for Californians,” he added.

Although Governor Newsom also superlatively claimed that California leads the world in electrification efforts, this is highly debatable, considering Norway and other European countries can boast higher per-capita uptake of electric vehicles, while China has by far the most electric vehicles overall globally. Not surprisingly, Norway also marks the highest per capita electricity use. What is certainly true is that California has forged ahead with a combination of leading government policies and innovative businesses. “Electric vehicles are central to California’s climate goals and clean energy future,” said Commissioner Clifford Rechtschaffen in the project’s announcement.