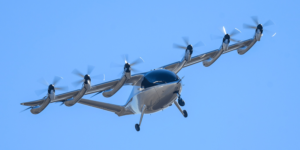 Archer Aviation has presented the series eVTOL Midnight. The air taxi that vertically takes off and lands offers space for one pilot and four passengers, not unlike the prototype Maker. Other spec has changed, however, yet an ambitious production schedule remains.

As for data provided, Archer claims a payload of over 1,000 pounds (453 kilograms) and says it optimised the Midnight for short-haul flights of up to 20 miles (32 km) with a ten-minute recharge time between flights. This is shorter than initially envisioned. When Archer presented the prototype eVTOL Maker, it targeted intra-city travel in the style of an air taxi of around 60 miles (just under 100 km).

Archer has yet to disclose the battery size. Last week, however, the company appointed Taiwan’s Molicell as a supplier when it announced building a factory in the US state of Georgia. The company will reportedly install the plant next to an airport near the town of Covington and produce 650 e-flight taxis annually from 2024.

“We continue the push towards commercialisation, with the vast majority of our resources focused on completing the development and certification of Midnight, building out our manufacturing and supply chain capabilities and hardening our go-to-market plans,” said Mark Mesler, Archer’s CFO.

Archer expects managing certification by the US Federal Aviation Administration (FAA) in 2024 and will begin commercial operations in 2025. The schedule includes cooperation and expertise of United Airlines, Archer’s key client at present, which reportedly wants to launch up to 200 air taxis to cover routes between city centres and airports, starting in New York.

At present, however, Archer continues testing the Maker and says the data it generates in the current flight tests would also help certify the Midnight. Archer is gearing up for a full transition flight in the coming weeks, twelve months after the prototype’s first hover flight. This will further validate the flight physics of Archer’s “twelve-tilt-six configuration” on both Maker and Midnight eVTOLs, so the company.

During forward flight, the aircraft’s tilt propellers spin on axes aligned with the oncoming airflow rather than edge-wise to the flow, as is the case with traditional helicopters – making the eVTOL up to 1,000 quieter in comparison. Since Archer’s aircraft spins 12 small propellers rather than one large rotor, it can also rotate them at significantly lower tip speeds, again resulting in much lower noise levels.

Archer lists further features distinguishing the Midnight, such as the electric aircraft having no single critical points of failure, meaning that should any single component fail, the plane can still safely complete its flight. In terms of sustainability, the company wants to use green energy “where possible” and include eco materials. Midnight’s seats are constructed out of “flax” fibre, for example, and Archer’s design uses fabric made from recycled contents like plastic bottles.

Archer completed Midnight’s preliminary design review in August to determine that the design is feasible for Type Certification and commercialisation.