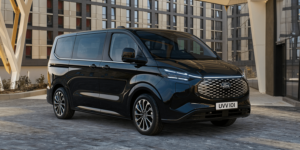 Ford has presented the all-electric E-Tourneo Custom. The passenger car version of the E-Transit Custom uses the same technology at its core, but the minibus still gets some features that are not available in the van.

As in the E-Transit Custom, the battery offers 74 kWh of usable capacity (gross: 83 kWh), which should be enough for up to 370 kilometres of WLTP range in the passenger van (ten kilometres less than in the commercial vehicle version). Ford states that the E-Tourneo Custom uses “the same high-density battery cell technology as the F-150 Lightning pick-up model, which is also fully electric”. This suggests that the cells come from SK On.

The battery can be charged via AC with 11 kW or via DC with up to 125 kW. Ford quotes a charging time of 41 minutes from (mind you) 15 to 80 per cent. With a net energy content of 74 kWh, around 48 kWh are needed for this window, which at 41 minutes results in an average charging power of 70 kW. However, the exact charging curve is not known. A full AC charge at 11 kW is said to take less than eight hours.

In addition to the flexible seat layout (up to a large cargo space when the six seats in rows two and three are removed), the E-Tourneo Custom offers a towing capacity of two tonnes. Ford does not specify the exact payload in the announcement, as it may depend on the respective equipment. The vehicle is basically designed for a payload of up to one tonne. As with the large E-Transit, there is a 2.3 kW socket in the interior for operating electrical devices.

Although it is the passenger car version for private customers, the E-Tourneo Custom is officially offered by Ford Pro, the brand for light commercial vehicles. The manufacturer states that the target group is “active families who are looking for the outdoors experience and need more than five seats and flexible interior space”. How much these families will have to spend for their electric van is not yet known. Ford plans to announce retail prices and equipment details “in good time” before the market launch.

As an alternative to the all-electric E-Tourneo Custom, the new Tourneo Custom will also be available as a plug-in hybrid with an electric range of over 50 kilometres, among other options. However, this will be a new hybrid system with a 2.5-litre petrol engine running on the Atkinson cycle, rather than the 1.0-litre three-cylinder in the previous version of the E-Transit Custom. The new Tourneo Custom will roll off the production line together with the Transit Custom at the Kocaeli plant in Turkey and will reach European customers from mid-2023.