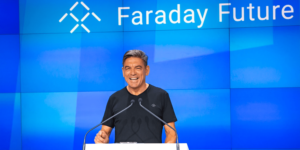 The struggling Californian electric car start-up Faraday Future has removed Carsten Breitfeld as CEO of the company. His successor has already been appointed internally. However, the tasks for the new CEO will not be easy, according to the latest publications.

Breitfeld has been removed as global CEO by the board of directors “following a comprehensive assessment of the company’s performance since its IPO in July 2021“, Faraday Future informs. Breitfeld, who was appointed CEO of Faraday in September 2019, is also encouraged to “tender his resignation from the board” in accordance with the company’s corporate governance guidelines. So he has not been sacked yet, but is expected to withdraw from operational responsibilities. It is not certain, however, that Breitfeld will stay on.

Breitfeld’s successor as global CEO will be Faraday’s former China boss Xuefeng Chen, also known as XF for short. He is now to ensure that the debut model FF 91 is launched on the market. As reported a few days ago, Faraday Future has still not been able to raise the necessary capital to start the production of the FF 91, which has already been postponed several times, this year as last planned.

This probably also refers to the company’s “performance since its IPO”. After all, FF had announced the production of the debut model several times even under Breitfeld, and the mass production of a second model at a contract manufacturer in South Korea was also planned in the meantime. However, FF has not yet managed to take the important but expensive step of getting its own production up and running in California.

“I believe the decision to appoint XF at this critical juncture of the Company is a timely and correct one,” says FF Board Chairman Adam He. “XF is a top talent in the global automotive industry and possesses both a global perspective and extensive hands-on experience across the global automotive industrial chain. His years of experience at Ford and Jaguar Land Rover will pave a solid foundation for his leadership of Faraday Future’s global team.” He said the company’s top priority now is to deliver the FF 91 “to our customers with high quality and minimal cost”.

Breitfeld himself does not appear in the current announcement. In the financing announcement a few days ago, he was still optimistic: “We have completed important funding agreements and are optimistic that we can put in place the additional funding we need to launch the FF 91.”

Tesla to deliver updated Model 3 in 2023