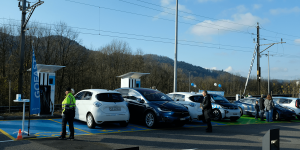 In the last few days, reports in various media outlets have circulated which, at least in their headlines, somewhat luridly suggested that Switzerland was planning driving bans for electric cars. It turns out the truth behind the “news” is not quite that wild.

The basis for the reports is the ‘Ordinance on Restrictions and Prohibitions on the Use of Electric Energy’. So far, this is only a draft the Swiss Federal Council is currently writing to prepare for the possibility of an electricity shortage, as are other countries – as an emergency response.

The draft ordinance regulates “restrictions and prohibitions on the use of electrical energy in order to secure the country’s electricity supply”. It outlines four possible escalation levels within which the use of bans would at best be staggered in the event of a crisis. E-mobility is only mentioned in escalation level 3 as one of many possible measures. There it says: “The private use of electric cars is only permitted for absolutely necessary journeys (e.g. exercising one’s profession, shopping, visiting the doctor, attending religious events, attending court appointments).” So: Should there really be a power shortage in Switzerland, according to the draft, partial driving bans for electric cars could be considered as one of numerous upstream measures.

BMW struggles to sell the i3 in China