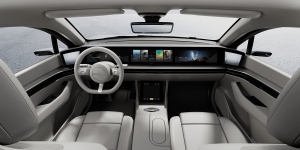 It looks as if Honda could get ahead of Tesla when it comes to in-car entertainment. New reports suggest that the company is working with Sony to take the Playstation 5 inside the EV. Fun aside, the suggestion actually stands on more serious grounds.

Sony and Honda founded a mobility joint venture earlier this year and announced three core competencies: Autonomy, Augmentation, and Affinity. Autonomy would, of course, be a prerequisite for any console to make sense within a car, while affinity would surely exist among PS5 players and augmented reality being almost inherent to gaming already.

Still, Sony Honda Mobility or SHM for short, has yet to confirm the information. Izumi Kawanishi, the President and COO, only said the company was preparing “content, services and entertainment technologies that move people”.

We’d also like to add that Sony and Honda have yet to actually build an electric vehicle together before integrating a built-in PlayStation. Perhaps surprisingly, it may be Sony taking the lead in vehicle development. The electronics company presented the electric car prototype Vision-S 02 at the CES in Las Vegas this year, spiked with sensors for autonomous driving.

Honda has yet to fully charge into the EV space. The company sells one electric car, the Honda e, in small numbers (with a small electric van just being announced for 2014). The EV-dedicated Honda e: Architecture won’t hit the market until 2025. At least in time for SHM to launch the first model, reportedly as a “high value-added EV concept” ready for autonomy level 3.

We leave it up to you to decide whether you consider the in-car PS5 high value.

Polestar to boost performance via software upgrade in the USA