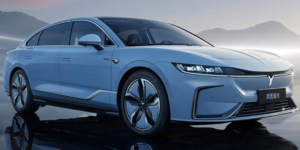 Dongfeng’s electric car brand Voyah has introduced its third model for the Chinese market. The approximately five-metre-long Zhuiguang electric sedan with twin-motor all-wheel drive has an output of 375 kW and is available with two battery sizes (82 and 109 kWh).

In terms of technical data, the Zhuiguang differs from the first Voyah model, an electric SUV called Free: The Free comes with an 88 kWh battery and uses either a 255 kW rear-wheel drive or a 510 kW all-wheel drive with two motors. The Zhuiguang is 5.01 metres long (with a wheelbase of exactly three metres), 1.97 metres wide and 1.50 metres high.

According to the manufacturer, the 82-kWh pack will be semi-solid-state cells. There are no further details about the battery itself. However, with a range of 580 kilometres in the Chinese CLTC cycle, the vehicle is on a level that would also be possible with conventional batteries – unfortunately, as mentioned, there are no details on the energy density and the installation space of the battery. The 109 kWh battery relies on regular cells and is supposed to allow up to 730 kilometres according to CLTC.

Unlike the rival model Nio ET7, the Voyah Zhuiguang is not designed for a battery exchange system. At a minimum of 458,000 yuan, the ET7 is somewhat more expensive. With a rented battery (also for the equivalent of 226 euros per month), however, the ET7 becomes 128,000 yuan cheaper – and is then on a comparable level to the Zhuiguang.

Deliveries of the Voyah Zhuiguang are scheduled to begin in the first half of 2023. Voyah is already delivering the first units of the Free in Norway – the first store was opened in Oslo in the summer. It is not known whether the sedan will also come to Europe.

Polestar to recycle magnets together with Cyclic Materials