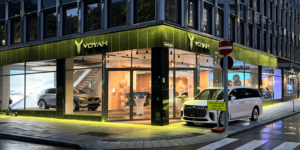 The market entry of Dongfeng’s Voyah brand in Europe is becoming concrete: The electric car brand has opened its first showroom outside China in the Norwegian capital Oslo. The first Voyah vehicles are to be delivered in Norway this year.

The location in the centre of the Norwegian capital Oslo coincides with the launch of the all-electric SUV model Free, whose deliveries in Norway are scheduled to start in the fourth quarter of 2022. The first test drives with the Free will be offered in July and August.

The Voyah Free is a 4.90-metre-long electric SUV that is offered with three drive options. The rear-wheel-drive version has an output of 255 kW and an NEDC range of 505 kilometres with an 88 kWh battery. The all-wheel-drive model produces 510 kW and uses the same battery for 475 kilometres. In addition, a version with a 33 kWh battery and a 1.5 litre range extender is available in China – for an NEDC range of 860 kilometres, 140 of which are electric. It remains to be seen whether this version will also be offered in Norway.

Voyah had announced its market entry in Norway in mid-February. At the time, it was said that Norway would only be the first step, with other European markets to follow. In the current announcement, the company does not give any details about further markets.

Production kicks off for the Mercedes EQE in China