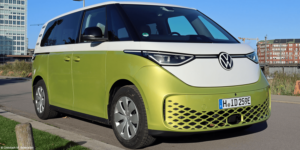 VW Commercial Vehicles is launching into a new era with the ID. Buzz as the electric motor replaces the diesel forever. How well does it work? And what has the latest software inside the EV got to offer? Christoph M. Schwarzer tested the ID. Buzz extensively, and here is his assessment.

The Buzz is love. No one can resist the design with reminiscences of the T1 bus. Volkswagen Commercial Vehicles has created an emotional van with the ID. Buzz and one that precisely reflects the Zeitgeist. There is no other way to explain the positive reactions of passers-by and fellow citizens. But what are the ID. Buzz characteristics, apart from its successful form – what can it do as an electric car?

Suppose we write off the Abt e-Transporter 6.1 under handmade, the ID. Buzz is the first battery-electric van by Volkswagen Commercial Vehicles in large-scale production. The Pro passenger car version (from €64,581.30 in Germany before subsidies) was available to us as a test vehicle; alternatively and slimmed down, there is the ID. Buzz Cargo (from €54,555.55). The technological base is the Group’s modular e-drive system (MEB) with a traction battery and 77 kilowatt hours (kWh) of energy content, as well as a 150 kW electric motor on the rear axle. The sprint to 100 km/h takes 10.2 seconds and ends at 145 km/h.

That’s not enough power for you? You should remember the earlier model series. T1 to T3 also had rear-wheel drive, and the engines ranged from the air- to later water-cooled boxer engines to the loud and lame self-igniter. The T4 brought front-wheel drive and direct injection (TDI). And the T5, which later became the T6, last had a Biturbo in the TDI like the Buzz 150 kW: A defect-prone and overbred engine that neither the customers nor Volkswagen enjoyed.

In terms of dimensions and package, the ID. Buzz most closely resembles the T3. With a length of 4.71 metres, it is compact. However, one should not underestimate the width of 1.99 metres without exterior mirrors and the height of 1.93 metres. Nevertheless, the car is agile and easy to manoeuvre, with a turning circle of around eleven metres. The version with a long wheelbase, higher battery capacity – we’re guessing more than 100 kWh – and optional all-wheel drive will be presented in the spring and probably delivered in 2024.

But the short car undoubtedly has its charms. The space for family and leisure is ample. With the Multiflex Board, there is a flat surface when the rear seats are folded down. Unfortunately, for the ideal camping weekend, the Buzz lacks the good-night package (blinds, seats as a reclining surface) and the Camp Mode known from Tesla, in which the stationary air conditioning runs. Please improve.

While we’re on the subject of shortcomings: The rear windows don’t open. And the boxes for the charging cables are in the wrong place underneath the Multiflex board – the tailgate needs plenty of space to open backwards, and that’s where the limiting bollards of the public AC charging stations are usually located.

The 230-volt interior socket for €398.65 extra is also poor. It only has an output of 300 watts. At the Hyundai Group, many electric cars have an exterior and interior socket with ten times the power. If such a solution could be ordered in the Buzz, that would be enough for an induction hob. Who wants to heat water with gas in an electric car?

That’s it for the criticism. Let’s move on to good stuff.

Economical for an e-van

The fact that the driving experience is electric bears mentioning again. The contrast to the TDI engines in the T6 is sharp. More important in the competitive environment, which essentially includes the Stellantis van and the Mercedes EQV, is efficiency: the Volkswagen ID. Buzz is economical, with a real consumption of 25.9 kWh/100 km. Including charging losses, it was 28.2 kWh/100 km (WLTP value: 21.4 kWh/100 km). This results in an average range of 297 km (standard specification 409 km).

To the details: We were particularly interested in motorway operation—the large front results in moderate aerodynamics. Nevertheless, driving at the recommended speed (132 km/h) is possible. The onboard computer showed 33 kWh/100 km as power consumption in a north German headwind—worst case. When the wind was calm the next day, the value dropped to 30.4 kWh/100 km. That makes a range of 253 km.

At the DC charging station, the ID. Buzz had the highest charging power we have ever read on an MEB vehicle: Up to 185 kW (factory specification: 170 kW) was possible, and even with SoC at 70 per cent, it was still 85 kW. What is still missing now is the traction battery’s pre-conditioning to call up the best values in all weather conditions. Volkswagen is working on this; we expect it from software version 3.3.

The position of the charge port at the rear right and far out on the body was also good. Regardless of the DC Park layout – i.e. drive-in or drive-through solution – it was easy to plug in the charging cable. Here the ID. Buzz is capable of Plug&Charge according to ISO 15118, so identification and activation are automatic, at least with Ionity and soon with more and more operators.

This brings us to the software. Volkswagen has put quite a few ID. owners through a lot. In the Buzz, the system is as good as it can be so far: There have been no bugs, and the functionality in the sense of the electric car driver (display of the SoC in per cent and so on) is as well thought-out as we would like to see anywhere. Except for pre-conditioning, mind you. In short, the software is finally where it should have been from the start. Only the working speed is still too low within the price segment.

The assistance systems also made a very good impression. Travel Assist combines lane centre control with adaptive cruise control. Everything functions with restraint and, above all, in such a way that you don’t turn it off maltreated by errors. Automatic restart in stop-and-go traffic, lane change, and traffic sign recognition – it works. OK, the last difference between 98 and 99.9 per cent is still missing in the traffic sign recognition. Here, however, the Buzz is no different from other cars.

The layout of the sensors in the windscreen is also well-solved. Instead of a space-consuming cluster behind the interior mirror, Volkswagen has mounted a part at the bottom of the windshield. The field of vision is, therefore, better, especially for drivers over 1.90 metres tall—all-around visibility in the ID. Buzz is quite good, thanks to the large windows. Driving the Buzz through the metropolis or along country roads is fun because it is easy and safe to steer.

Distributing instead of selling

In summary: Fancy an ID. Buzz? Order it. Demand is higher than production capacity, and Volkswagen Commercial Vehicles will temporarily distribute the Buzz instead of selling it. The depreciation should be correspondingly low. The price is high in absolute terms, but not compared to competitors. Besides, it has never been cheap to own a VW bus. That is not a good argument, but it shows which Group of buyers is interested in this van.

Volkswagen Commercial Vehicles is taking a fundamental step with the ID. Buzz. In twelve years, i.e. from 2035, even vans will no longer be allowed to emit any direct CO2 emissions. This is a de facto ban on combustion engines. The Buzz cannot yet keep up with the ICEs in every respect, such as towing capacity. It shows a direction – and that is a success.