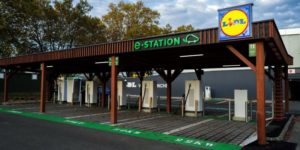 Lidl opened four fast-charging parks at shops in France at the end of last year. Each location has several DC charge points in different power levels and AC chargers. Two more facilities are to follow this year.

The four Lidl charging stations already in operation are at supermarkets in Villefranche-sur-Saône, Landivisiau, Pennes-Mirabeau and Tourcoing. ABB and DBT were on board to deliver the hardware and equipment. Specifically, four AC charging points with 22 kW, four DC charge points with up to 90 kW, and five HPC connections with 180 to 360 kW power are available at each location, including the new ABB Terra 360 column.

The Lidl charge parks have a roof including PV modules, and Lidl says it will keep them open 24/7, i.e. independently of supermarket opening times. Drivers may use RFID cards and apps from charging network operators or an online-based ad-hoc payment via QR code after the price is displayed on the terminal. According to the announcement, the price will be 25 cents per kWh at the AC charging points and 40 cents at the DC chargers.

Lidl says it has installed almost 2,300 charging points at more than 500 of its supermarkets, 1,590 of which are in France. Two more Lidl fast-charge parks in France will follow before the end of 2023.

In May 2022, the Schwarz Group, to which Lidl belongs, announced an expansion of around 6,200 new charging points across Europe. In Germany, just under a third of the 3,200 shops will be equipped with a charging option by March 2023. In Germany, however, it is mostly a matter of individual charging points, not such large fast-charging parks as have now been opened in France.

In the UK, Lidl is working with Pod Point, and in 2021, they aimed to install 350 fast chargers at Lidl stores, as reported.