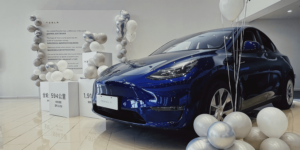 Tesla’s renewed – and quite significant – price cuts for the Model 3 and Model Y in China are now causing protests from existing customers. Hundreds of Tesla owners protested against the company’s pricing policy in front of Tesla showrooms and delivery centres in China over the weekend.

Tesla lowered its prices in China just before the weekend in a bid to salvage waning sales numbers. Those who recently purchased a Tesla then took to protesting to demand retroactive discounts and credits for contracts they’d signed shortly before.

This is the second time the prices have been slashed in China. In October 2022, Tesla cut Model 3 and Model Y prices by around 9.4 per cent. According to CNN Grace Tao, Tesla’s vice president for external relations in China, explained: “Tesla’s price cuts are backed by innumerable engineering innovations. We are responding to the country’s call with practical actions to promote economic development and release the potential of domestic demand.”

Earlier this month, Tom Zhu was revealed to become Tesla’s most influential manager after CEO Elon Musk. In addition to his role as China boss and highest-ranking manager for Tesla’s sales in the rest of Asia, Zhu is to be given additional responsibilities in North America and Europe.