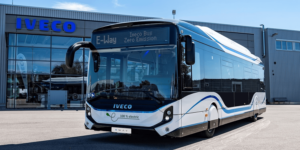 Italian transit company Busitalia has signed a framework agreement with Iveco Bus to supply up to 150 electric buses over the next three years. The deal represents the most significant order for Iveco’s E-Way buses in Italy to date and comes at a time when the company is increasing activities in the market.

Busitalia expects deliveries between 2023 and 2025, with the first 18 units due to be deployed in Padua and Rovigo in July this year. Iveco Bus, which belongs to the Iveco Group, has 800 units in operation that have completed 42,000,000 km. Busitalia opted for the 12-metre version fitted with air conditioning, USB plugs, dedicated areas for wheelchair users, and a rear-view vision system. Charging will happen at the depot overnight. However, Iveco Bus also offers a pantograph option.

“This agreement confirms our position as a leader in full electric mobility solutions and proves that we are the ideal partner for transport operators in providing emission-free mobility services,” said Domenico Nucera, President of Bus Business Unit, Iveco Group. “We are proud to support Busitalia in making public transport in Italy even more sustainable.”

The customer, Busitalia, is a subsidiary of the FS Italiane Group, which mainly operates local public transport services.

Earlier news saw Iveco announcing its intention to resume bus production in Italy. Among other things, battery and fuel cell buses were to be assembled at the Iveco plant in Foggia. Engineering and production capacities for batteries could be set up in Turin.

The latter has come to pass since the Iveco Group opened a new powertrain plant in Turin last October. At total capacity, the plant will employ about 200 people to produce over 20,000 electric axles and battery packs a year, so Iveco. The electric axles will equip heavy-duty vehicles like the Nikola Tre truck. In contrast, the electric transfer boxes and compact battery packs will be installed on light commercial vehicles and minibuses, such as the new Iveco eDaily.

As for the E-Way model chosen by Busitalia, production is set at CNH Industrial’s spin-off company Heuliez in France and is based on its GX-Elec series. Iveco offers the E-Way in two midi and standard sizes and an articulated e-bus. Heuliez is part of the Iveco Group.

Iveco stopped producing buses in Italy in 2011. At that time, the manufacturer still belonged to Fiat Industrial, which later merged with the Italian-American company CNH Industrial. However, Iveco separated from the former parent company in January 2022.

When we asked Iveco about the Foggia plant, the company told us that the plans were “going on, with no major update to this day”.