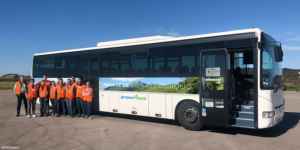 The Rouen municipality in northern France is having 49 Iveco Crossway diesel intercity buses converted to electric drives to operate as school buses. The project was awarded to a French consortium from which Greenmot will supply the retrofit kit.

This is the first French association of municipalities to launch a tender for the conversion of their diesel buses to electric buses. The Métropole Rouen Normandie awarded the contract to the consortium made up of Grennmot, Forsee Power, SPL Normandie and Comeca.

The Greenmot retrofit kit for the school buses uses batteries from Forsee Power. These are equipped with battery systems from the Zen Slim product line made up of 11, 16 and 21 kWh modules that will be installed in Greenmot’s retrofit kit at a new factory in Villefranche-sur-Saône.

The finished kits will then go to SPL Normandie, the company responsible for integrating the conversion kits into the buses. SPL is located just 25 kilometres from the bus depot, which also ensures subsequent maintenance. Comeca, the fourth in the group, is supplying the charging infrastructure 49 buses that are to be converted to electric power.

The 49 converted Iveco Crossways will operate on the “Astuce” school route network. After the delivery of a first test vehicle at the end of 2023, the converted school buses are to be integrated into the network by 2025. According to the consortium, Greenmot’s retrofit kit will enable the electrification of diesel vehicles “at the cost of a used vehicle.”

“This is a strong signal for Greenmot which validates the positioning taken in 2020 with the GREEN-eBUS project supported by ADEME and the technical developments we have carried out over the past 12 months on the first prototypes,” explained Stéphane Londos, founding president of Greenmot.

In France, some 69,000 coaches are currently in operation, half of which are more than five years old. In March 2020 decree from the French government stipulated that vehicles older than five years may be retrofitted without the prior agreement of the original manufacturers, paving the way for large-scale conversions.

Nicolas Mayer-Rossignol, Mayor of Rouen and President of Métropole Rouen Normandie explained, “We have given ourselves strong and ambitious objectives: at least 50% of our bus fleet, including 100% of Transport est-ouest rouennais made up of low-emission vehicles. We are committed to pursuing a social-ecological policy that preserves both the climate and the purchasing power of French people. Retrofitting is a solution that is both ecological and economical, allowing us to fulfill our objectives while applying a principle of sobriety!”

Retrofit solutions not only enable a lower-cost fleet conversion, but they also save the power required to manufacture completely new vehicles. Retrofitting also allows fleet operators to fully utilise the use life of existing vehicles, which enables a much faster conversion of fossil-fuelled vehicles to zero tailpipe emissions.

businesswire.com and information via email