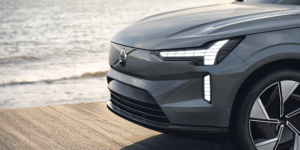 Volvo Cars has announced plans to launch its own offshoot of the 009 electric van from the Zeekr brand, which is also part of the Geely Group, in China at the end of 2023.

In a graphic from a presentation published there, the Swedish companys’ current and upcoming electric models are shown. This means the XC40 BEV and C40 for the existing models and the upcoming EX90, a model called ‘EX90 Excellence’ (possibly a long version for China), a smaller electric SUV (probably the EX30) and an ‘MPV’, a multi-purpose vehicle – i.e. a van.

This is the starting position that Qin Peiji, President of Volvo Cars Greater China Sales Company, presented at the aforementioned media briefing. There are no further official details from the manufacturer.

The publication Car News China assumes that this van will use the platform and powertrain of the Zeekr 009, but will have an independent design. The platform in this case would be the SEA from the parent company Geely. The production version of the Zeekr 009, which recently went into production, offers two battery options of 116 or 140 kWh and uses, among other things, CATL’s Qilin battery, i.e. the battery manufacturer’s latest cell-to-pack generation.

The powertrain is a 400 kW all-wheel drive with two electric motors, but the version with the longest range of 822 kilometres according to Chinese standards has only one motor. Whether Volvo will adopt this drive technology without modification is currently unknown, as is a possible export to other markets.

As electrive has learned from insiders, there are indeed considerations in Sweden to launch such a model in China. The background is likely to be the feedback on the Concept Recharge design study unveiled in the summer of 2021, which was interpreted as a preview of upcoming SUV models such as the EX90, but also contains elements of a van. To what extent the Concept Recharge also anticipated the possible Volvo design of a Zeekr 009, however, is not exactly clear.