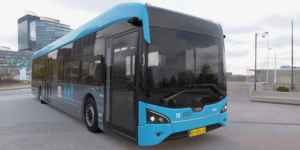 The LE models are low entry buses but also have a raised interior floor and thus offer a different seating position. In addition to the LE models, VDL also offers the Citea as an LF – this stands for “low floor”, i.e. a continuous low-floor concept. At VDL, the numbers in the model designation stand for the vehicle length: the LE-122 is 12.2 meters long, the LE-135 is 13.5 meters.

“We are immensely proud that VDL Bus & Coach is able to supply the entire new fleet for this newly formed concession,” said Rolf-Jan Zweep, who took over as CEO of VDL Bus & Coach from Paul van Vuuren on January 1 this year. “The new-generation VDL Citea is ideally suited for this with its efficient energy consumption and optimal driving characteristics.”

Over in neighbouring Germany late last year, German rail operator, Arriva announced it was expanding its fleet in the North Brabant East concession in the Netherlands with 64 new electric buses from VDL Bus & Coach. In this German concession, VDL is supplying 40 new generation Citeas of type LF-122 and four articulated buses of type LF-181 for public transport in the city of Tilburg, as well as 20 Citea LE-135 for use between Uden-Veghel-Eindhoven and Uden-Veghel-Den Bosch.