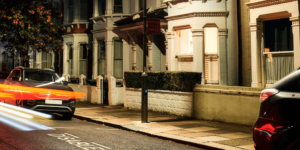 Liverpool in North West England has chosen Ubitricity to triple the city’s charging network with lamp posts doubling as charge points. Founded in Berlin, Ubitricty is now a wholly owned subsidiary of the oil giant Shell and has ambitious targets in the UK.

In Liverpool, the City Council wants Ubitricity to install 300 charge posts. These will join the existing network of 150 on-street chargers. Local media suggests this would make Liverpool the authority with the third largest public charging network in the UK behind London and Coventry.

A lack of accessible public EV charging points is a common barrier to EV adoption. Analysis from the Department of Transport found that as of July 2022, the North-West had 76% fewer public EV chargers per 100,000 people than London.

Ubitricity charge points built directly into existing street lampposts charge up to 5kW and take under two hours to install. The Liverpool roll-out will follow requests of residents and businesses, and the Council said it received more than ten requests a week for new public charge points.

Cllr Dan Barrington, Cabinet Member for Climate Change and Highways for Liverpool City Council, added, “The fact that the roll-out is being led by community requests means the points are going where the demand is needed most, which means they’ll be getting maximum usage”.

Ubitricity aims to finish the installation in the spring of this year. In the second phase, Shell and Ubitricity will maintain Liverpool’s EV charging network.

Shell bought Ubitricty in September 2021. They target installing 50,000 Ubitricity chargers in the UK by 2025, funded mainly by the British Government’s On-Street Residential Charging Scheme (ORCS). The oil and gas corporation must only retain about a quarter of the cost.

Apart from Liverpool, where Ubitricity first appeared in 2018, the company’s installations can be found in many London boroughs and the German capital Berlin, where they started the first project in 2014 and expanded to London in 2017. Most recently. Ubitricity also scored a winning bid in France.

Liverpool targets net zero by 2030 after the Council declared a climate emergency in 2019 and had first discussed a clean air plan in 2018, as reported.

Shell buys out Volta Charging in the US