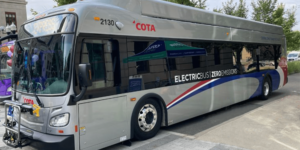 Charging infrastructure will be provided by NFI Infrastructure Solutions, which will install 20 ABB 150kW plug-in chargers and 40 dispensers in Columbus, OH.

Supported by Federal Transit Administration funds, this order follows COTA’s previous purchase of eight Xcelsior Charge NG transit buses, announced in May 2022. The fleet of soon 28 e-buses will support COTA’s goals of transitioning to a 100% zero-emission bus fleet by 2035 to achieve net zero carbon emissions by 2045.

The continued relationship with New Flyer builds on existing ties to the parent company NFI Group spanning 20 years. NFI has delivered over 186 transit buses to COTA since 2001. “With this latest order of high-performance electric buses and infrastructure, we continue to enable COTA’s safe and successful transition to a net zero carbon future,” said Chris Stoddart, President, North American Bus and Coach, NFI.

New Flyer electric vehicles are operating or on order in more than 120 cities in six countries. The company claims its ZEVs have completed more than 85 million service miles.

Electric trucks on the roll in Gothenburg port