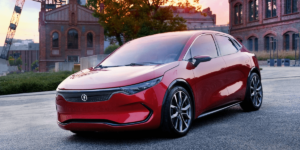 The production of Poland’s first electric car is delayed. The state-owned company ElectroMobility Poland (EMP) has now confirmed that production of the Izera brand of electric cars will not start until the end of 2025.

EMP made this statement to the German publication Automobilwoche. The state-owned company has also confirmed that construction of the factory in Jaworzno is now scheduled to begin in early 2024. ElectroMobility Poland did not provide any further details.

Originally, production was supposed to start in 2024. It is not known why the start of construction and production is now delayed. Problems with the approval or financing of the project are possible, but of course also with the development of the vehicle: EMP had only confirmed in November 2022 that the Izera would be based on Geely’s SEA platform.

Since this cooperation was only decided in November 2022, it would have been a very tight schedule, even with a complete takeover of Geely’s technology, to redesign, develop and, above all, sufficiently test the vehicles for a production start in 2024 – and still prepare for production. However, EMP has only secured the licence to build vehicles based on the SEA, but does not buy any platform components. So EMP still has to organise component production together with suppliers.

According to earlier announcements, this was to be done primarily with Polish suppliers in order to increase domestic added value – after all, EMP was founded with the aim of compensating for declining passenger car production in Poland. As “Automobilwoche” now writes, however, German companies will also benefit from the approximately 1.1 billion euro investment volume: Dürr is responsible for planning and building the production facilities.

According to CEO Piotr Zaremba, EMP intends to rely “heavily on local suppliers” in addition to the plant manufacturer from Baden-Württemberg. A number of suppliers have indeed settled around the ex-Opel plant in Gliwice (formerly Astra, now light commercial vehicles), which belongs to Stellantis via Fiat, the small car plant in Tychy and also the Mercedes site in Jawor (including combustion engines, battery assembly and, in future, electric vans). However, these are “often subsidiaries of western suppliers”, according to the report.