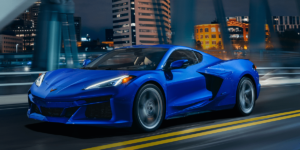 General Motors now offers its Corvette sports car with a small e-motor, primarily designed to “enhance the driving experience” and turn the vehicle into AWD at times. However, the hybrid Corvette E-Ray will eventually be followed by a fully electric Corvette based on GM’s Ultium platform.

First announced last year, the now-named Corvette E-Ray borrows from the familiar Stingray designation of the ICE series. As is well known, the current generation Corvette is, for the first time, no longer the classic Corvette concept with a front-mounted V8 but a mid-engine sports car.

GM has taken advantage of this design in the Corvette E-Ray: the 6.2-litre V8 gasoline engine continues to drive the rear axle with its 364 kW. The electric part of the system is located on the front axle. The electric motor installed there has an output of 119 kW, and when switched on, the Corvette temporarily has an all-wheel drive – which GM calls eAWD. This should result in better driving performance and increase driving stability in low-traction environments, as the system also analyzes the road and grip at all times. “E-Ray is also the only sports car pairing two separate propulsion systems to provide naturally aspirated V-8 power with electrified responsiveness powered by eAWD, making it one like none,” writes GM.

However, this sheer supporting role the electric drive gets also shows in the technology. GM did not opt for a plug-in hybrid. Instead, the battery of 1.9 kWh, small enough to be mounted between the front seats, only recharges in recuperation.

Still, die-hard Corvette fans may get a first taste of electric driving – in “stealth” mode, the hybrid sports car can drive up to 45 mph (70 km/h) on pure electric power using the front wheel drive. However, the fun does not last very long regarding the battery size.

Incidentally, Chevrolet does not comment on the alleged Corvette EV sub-brand, which was brought into play in a media report in December. With reference to an insider, the magazine Car and Driver had written that GM would establish the Corvette sports car series as a fully electric sub-brand and expand the model range, latest in 2025. However, as for now, there is still no information about the schedule for the purely electric Corvette.