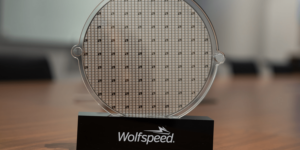 The US company Wolfspeed wants to build the world’s largest plant for semiconductors made of silicon carbide (SiC) in Saarland for use in electric vehicles, among other things. Auto supplier ZF will also take a minority stake in the factory.

This was reported by the German publication Handelsblatt with reference to “circles familiar with the project”. Wolfspeed will build the factory for SiC semiconductors on the site of a former coal power plant in Ensdorf. The North Carolina-based company plans to start series production in four years. In addition, according to the Handelsblatt, a research centre is to be built in which ZF is to hold a majority stake. The realisation of the large-scale project, however, depends on the promise of government subsidies, the report continues.

Wolfspeed’s decision on the location is largely due to its partner ZF. The automotive supplier has been present in the Saarland for decades and has correspondingly good contacts to the state’s politicians. In November 2022, ZF also announced its intention to convert its transmission plant in Saarbrücken into a leading location for purely electric drives and, against this background, to invest a three-digit million sum. According to the “Handelsblatt”, as the largest employer in the region, ZF can also provide urgently needed personnel for the new factory.

Wolfspeed has so far mainly been present in North America. The most recent factory built there cost about two billion dollars. According to the source mentioned above, the factory in Saarland will be even bigger and correspondingly more expensive. There are already customers from Europe: Wolfspeed’s SiC semiconductors are, for example, being integrated by Mercedes-Benz in the drives of future platforms for electric cars. Jaguar Land Rover will also rely on SiC semiconductors from Wolfspeed in their next generation of electric cars.

The SiC semiconductor market is currently on the move. In mid-November, US supplier BorgWarner acquired a 500 million US dollar stake in Wolfspeed, securing production capacities for silicon carbide semiconductors worth up to 650 million US dollars per year. In 2017, a Wolfspeed takeover attempt by Infineon failed only because of a veto by the US government.

Bosch is likely to be following developments in Saarland closely at the moment. Together with Denso from Japan, the German company is so far the only automotive supplier with its own chip production. Bosch only recently announced that it would build innovative SiC power modules locally in China in future. In Germany, Bosch’s large-scale SiC semiconductor production is located in Reutlingen.

Finally, a brief digression on the importance of SiC semiconductors compared to silicon chips: SiC semiconductors have higher conductivity and enable higher switching frequencies compared to silicon chips. In addition, only half as much energy is lost in the form of heat, which increases the range of electric cars. Since less heat is emitted and the SiC components can also be operated at higher temperatures, the cooling system of the power electronics can be smaller. This not only saves energy but can also reduce weight and costs thanks to the more compact cooling systems.