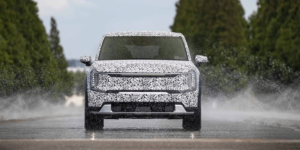 Shortly before the premiere of the production version of the Kia EV9, concrete hints about the drive variants and prices are emerging. According to these, the US prices for the electric seven-seater SUV are likely to be between 56,000 and 73,000 dollars.

That would be the equivalent of between 51,500 and 67,150 euros. The eMobility portal Electrek reported on the alleged US prices – referring to a current customer survey by Kia in the USA. According to the report, five equipment options for the EV9 with ranges of 220 miles to 290 miles (354 to 467 kilometres) were named and the survey participants were asked which of them they would choose. It is therefore not known whether these are actually the final prices including the exact drive configurations or whether the sales department has used slightly modified values.

According to this, the all-wheel drive variants are to have a power output of up to around 300 kW. So far, all-wheel drive versions with 239 kW or 430 kW in the Kia EV6 GT are known for vehicles based on the E-GMP – as long as only those all-wheel drive variants with the 77.4 kWh battery are considered. Whether the EV9 will get an additional battery option with higher energy content is not confirmed. The information from the US customer survey does not allow any clear conclusions to be drawn here: although it is likely that there will be two battery options, as the survey asked for variants with the same power but different ranges.

However, since these are hypothetical variants whose data cannot be directly transferred to later series models, we will have to wait for the actual premiere. But that won’t be long now, as Kia wants to present the EV9 in the first quarter of 2023.

Nissan invests in electric drive production in the USA