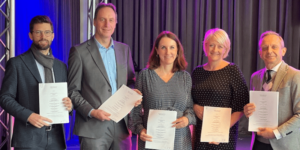 In Germany, Vattenfall and the NH Hotel Group are collaborating to set up charging stations for electric vehicles across the country. The hotel group is planning to install publicly accessible fast-charging infrastructure with 180 kW charging columns and AC chargers at 50 of its hotel locations.

“We are pleased about our first cooperation with a hotel chain. It is important to us that the charging stations at the hotels are accessible to all potential users, not just hotel guests,” says Franziska Schuth, Head of Public Charging E-Mobility Germany at Vattenfall. “The NH hotels are not only in excellent locations, but offer some amenities while waiting.”

Alexander Dürr, Senior Director of Operations Northern Europe at NH Hotel Group, added: “This initiative by NH Hotel Group is part of its Room4Planet strategy, which sets the roadmap for meeting commitments to fight climate change and progress towards decarbonisation. Employees, suppliers and customers will be involved as key players in the implementation.”

The expansion of the charging infrastructure at German hotels, some of which is also publicly accessible, is thus continuing to gain momentum. Last year, for example, Wirelane received corresponding orders from Motel One and Gorgeous Smiling Hotels (GSH), while the hotel chain B&B Hotels decided to work with ChargeOne to set up more than 1,500 publicly accessible charging points at the approximately 150 B&B Hotels nationwide. In summer last year, charging operator Allego entered into a collaboration with Radisson Hotel Group to build charging infrastructure for electric cars at more than 220 Radisson Hotel Group locations across Europe. The fact that own charging points are increasingly seen as a benefit in the hospitality industry is also shown by a recent survey by the hotel and restaurant association DEHOGA.

Tritium garners large order from Evyve in the UK