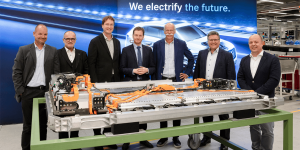 With batteries in high demand Daimler decided it won’t sell any batteries to home owners any longer as they deem them to be technologically too advanced (or too precious) for residential use. The stationery storage packs were introduced three years ago via Daimler’s Accumotive.

Daimler motor factory to turn into battery centre in Germany

Workers in Untertürkheim rejoice as Daimler announces to join its battery research with the facilities of its subsidiary Accumotive on site. Together the location will host what Daimler calls its competence centre for batteries within the larger push for e-mobility production hubs. 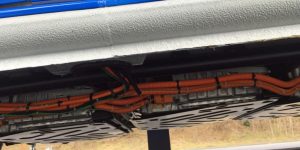 Hydrogen racer: Pininfarina surprised in Geneva, showing its H2 Speed concept. It is fuelled by a light-weight hydrogen fuel cell that powers two electric motors by Green GT with race specification. The Italian car design firm claims its creation to be between a “competition prototype and a production supercar.” It definitely has been styled throughout, including the sound.
autocar.co.uk, worldcarfans.com

Electric racer: The teaser becomes reality, as Giugiaro unveiled its all-electric GTZero concept in Geneva. Very. Three electric drives have a combined output of 360 kW, gearing up for a top speed of 155 mph. The carbon frame keeps it light enough for a 300 mile range.
autocar.co.uk, worldcarfans.com,

Daimler battery production: Daimler invests 500m euros in its subsidiary Accumotive to triple its battery assembly capacity and build a second factory in Saxony, Germany. Construction will start in autumn, with operations set to begin already in summer 2017.
greencarcongress.com, daimler.com

Google car crash: The self-driving capabilities of the internet firms EVs have proven faulty for the first time, as a Google car brushed a public bus at a crossing. Both, the car and its human driver apparently assumed the bus would let them back into the lane. Welcome to the world of everyday driving.
forbes.com, theverge.com

Daimler battery storage: Daimler subsidiary Accumotive announced a new cooperation with Hannover’s utility enercity. Together, they will set up a 15 MW battery storage facility before the year’s end. 3,000 battery modules reserved for existing electric Smarts will be stored and serve as stationery energy storage at the same time. It is the Daimler’s second storage project, following the first in Lünen.
daimler.com

Swatch battery update: The “super battery,” which Swatch says will have 30 percent more capacity, utilises vanadium pentoxide and an unconventional electrolyte. A first production line for prototypes was recently set up and serial batteries for light-electric vehicles can be expected this year.
nzz.ch (in German)

Eco-driving research: Researchers from TU Chemnitz and the University of Southampton studied eco-driving behaviour in hybrid vehicles. They found that green technologies alone are insufficient and have to be backed up by systems that facilitate and not only encourage eco-conscious driving.
greencarcongress.com, sciencedirect.com (guidelines)

Hyperloop pod by MIT: After Space X just asked Aecom to build a test track for Elon Musk’s high speed tube, a team from the Massachusetts Institute of Technology (MIT) won the design competition. It will now build the capsules for the Hyperloop.
mashable.com, engadget.com