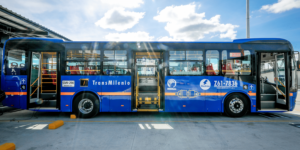 BYD has introduced what they are calling the longest electric bus in the world. The K12A is 27 metres long, seats 250 passengers, has a top speed of 70 km/h and a range of 300 kilometres. The XXL bus was primarily developed for the South American market, for example for large cities such as Bogotá.

UK EV policies: British government has earmarked 600m pounds to promote the uptake and manufacturing of electric vehicles until the next decade. If that means that i.e. if the plug-in car grant will be extended beyond February 2016 has not been addressed in detail yet.
airqualitynews.com, fleetnews.co.uk

Electric bus for Bogota: BYD enters Columbia with a custom model that will enter the Transmilenio public transport of Bogota in the next two weeks. It will replace an ageing fleet of diesel vehicles. Medellin also voiced interest in the 12 and 18 meter Chinese electric buses.
ecns.cn