BorgWarner has completed the acquisition of Delphi Technologies. The US-American automotive supplier wants to use the acquired know-how in electronics and power electronics to become one of the leading companies for electric drive systems.

BorgWarner has now taken over its competitor Delphi also to retain its expertise in power electronics and thus be better equipped for the change to e-drives. In addition, the US supplier has concluded a contract with an unnamed European car manufacturer to supply its eTurbo for a passenger car.

Tesla update: The losses of Wallstreet’s wunderkind grow, mainly due to investments into Model 3 production supposed to start in July. The EV maker reported a loss of 330m dollars for the first three months of the year, up from 282m a year earlier. At the same time, Tesla reported strong sales for the quarter with a revenue of 2.7bn dollars, that is twice what it made in 2016. This translate into a new delivery record of 25,051 Model S and X. As always, Elon Musk appeased investors and assured that everything is going ahead as planned, including “significantly expanding our infrastructure to support Tesla owners.” The CEO also said a few words on the Model Y, the planned compact SUV. Due by late 2019, it will not utilise the Model 3 platform but one that allows for more efficient production.
cnn.com,greencarcongress.com, Letter to shareholders, teslarati.com (Model Y)

Delphi to embrace electrification: The U.S. supplier says it would spin-off all combustion engine endeavours in favour of a focus on zero emission drives. Autonomous tech is the other field Delphi will invest in and Wallstreet welcomed the restructuring with +12%. Bosch too took a similar turn this week as it said it had sold its starters and alternators business to a Chinese mining company.
reuters.com

As Honda hurries its electrification in China reportedly, new spy shots allegedly give an idea of how a BEV could look like. It may be an electric version of the Honda HR-V, better known as XR-V to Chinese consumers and made together with Dongfeng.
indianautosblog.com, performancedrive.com.au 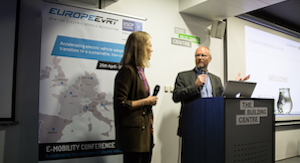 Join Europe’s leading E-Mobility Conference in Paris on the 10th of May! A major networking event where 150+ senior figures in the European E-Mobility industry will meet to discuss the future of clean transportation and electric vehicles. Companies attending the conference include: Formula E, Engie, Renault, EV-Box, Schneider Electric, EDF, Nissan Europe, Cenex… www.europeevrt.com/paris-conference

Silent collector: BYD has unveiled its all-electric refuse truck for the U.S. market. The truck is a cab and chassis platform, which is designed to integrate with all of the major refuse truck body builders and can be configured as a side, front, or rear loader, and roll off. Range is given at 76 miles at a 10 ton payload.
ngtnews.com

Recall: Nissan is asking 25,000 Leafs and Sentra vehicles back to the garages in the USA due to a fault with an airbag. Nissan will begin notifying owners on June 11.
cars.com, automotive-fleet.com

Boating start-up: Seattle start-up Pure Watercraft is looking to build Tesla-styled EV motors for boats. The parts are IP67, meaning they can be submerged in 1 m of water for at least 30 minutes. A single charge can keep a battery running for up 40 hours pushing a lightweight 27 foot boat at 3 mph, though it comes with a hefty price tag around 12,000 dollars.
techcrunch.com, purewatercraft.com

Mild hybrid: Delphi Automotive has unveiled a new 48V mild hybrid system, and confirmed working with two global automakers, hoping to begin production in the next 18 months. The solution minimizes demand on the engine, improving performance and lowering CO2 emissions. They predict one out of every ten cars sold in 2025 will be a 48V mild hybrid.
greencarcongress.com

Electromobility powered by Siemens – Siemens is presenting its drivetrain solutions for hybrid and electric cars on the “Vehicle Show Electromobility” in Bad Neustadt a.d.S this weekend (April 16th and 17th). Find Siemens at the fairground of the demo city for electromobility and take a glance on the latest innovations. www.siemens.com/electriccar

Bidding in Norway: ABB has won a contract to electrify a Norwegian hybrid car ferry. The ferry will operate a popular passenger route, and the vessel can be adapted to run as a full electric with charging system on shore.
allaboutshipping.co.uk