Innovation truck: Supplier ZF will present its ‘Innovationstruck’ with a hybridised transmission at next week’s IAA for utility vehicles. The truck is said to be controlled via a tablet computer and can shunt electrically. Also at the IAA, company KSPG presents its heat pump system for electric and hybrid utility vehicles which is said to save up to 60% of energy usually used for temperature regulation.
zf.com, automobil-industrie.vogel.de (KSPG, in German)

Nuclear power for EVs? Missouri University developed a water-based nuclear battery which they say might also be used in EVs. The cells are based on betavoltaic (energy through radiation) and are built with the isotope strontium-90. The battery is long-lasting and safe, at least according to the researchers.
electric-vehiclenews.com, missouri.edu 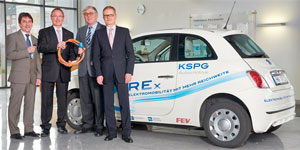 Silent and compact REX: German KSPG and FEW are testing a low-noise range extender installed in an electric Fiat 500. The V2-type engine weighs only 62 kilos and fits into the space of a spare tyre. According to German media sources, KSPG expects the range extender to go into serial production within 18 months at a price of less than 2,000 euros (2,700 dollars).
electricvehiclesresearch.com, aachener-zeitung.de (In German)

Vampire drain de-mystified: How thirsty is a Tesla really if being left unplugged in a freezing parking lot in the middle of Norway? Bjørn Nyland took the test and after 27 days, his Model S had consumed about 20% of its previous charge of 95%. The car went into hibernation mode to keep only the most essential functions operational.
youtube.com (Video) via transportevolved.com