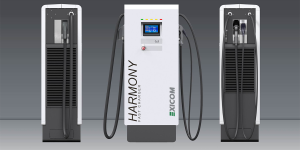 Exicom to set up EV infrastructure in India

Exicom of India has made the winning bid for setting up electric vehicle charging stations in Madhya Pradesh, India. The offer for the NTPC Tender includes 120kW and 50kW charging stations and DC chargers of CCS standard for electric buses. 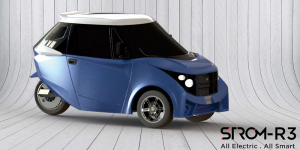 Mumbai-based Strom Motors has unveiled a compact electric car designed for Indian cities. Once the Strom R3 will roll into the shops on its three wheels later this year, Indian buyers may get one from 300,000 Rupees – about 3,700 euros.

Fuel cells to share: Under the name BeeZero, German company Linde wants to offer carsharing with some 50 Hyundai iX35 in Munich from this summer. If successful, the scheme could be implemented in other cities, as well as include FCVs from different manufacturers.
gasworld.com, the-linde-group.com

BMW invests in mobility service: BMW i Ventures is investing in RideCell, a company offering mobility-as-a-service (MaaS) software solutions for i.e. car- and ridesharing that automates end-to-end business operations. This could mean BWM is not only moving forward with its DriveNow business, but also rumoured Uber competitor (we reported).
greencarcongress.com, electriccarsreport.com

Romania update: As reported, German retailer Kaufland wants to install EV fast-chargers at some of its locations in the Eastern European country. The first of ten planned stations has no gone online. Moreover, Kaufland added 18 e-Golf to its fleet.
romania-insider.com

Electrifying Mumbai: The Indian city wants to add 25 to 30 all-electric buses to its fleet in the coming months, converting some if its diesel-buses to EVs. It already received a grant from the central government to fund its undertakings.
indiatimes.com

Queensland plugs in: The Australian University of Queensland has installed four Tritium fast-chargers. The latter are powered by the sun and are free of charge. All four fast-chargers have an output of 50 kW.
reneweconomy.com.au, brisbanetimes.com.au

Re-use: Remember those telephone booths we had before mobile devices came along? Auckland found a new use as Spark transforms phone boxes into EV charging spots. Not a first, as Korea already trials the same idea. But if successful, Spark could eventually turn 3,500 booths into EV chargers in New Zealand.
stuff.co.nz

The “Governors’ Accord for a New Energy Future” unites 17 U.S. governors in their strive for clean energy, green transport solutions and to modernised grids on a national scale. Together, they represent 127 million American citizens, both Democrats and Republicans.
ens-newswire.com, governor.wa.gov

Hybrid buses for Boston: The Massachusetts Bay Transport Authority (MBTA) will order up to 90 diesel-electric buses for Boston. The Xcelsior hybrids come from New Flyer Industries. The contract secures at least 44 buses worth about 50m dollars as well as options for another 46 vehicles.
canadianmanufacturing.com

Hybrid buses for Mumbai: The Indian metropolis is about to assign Tata Motors to deliver around 25 hybrid buses to the Mumbai Metropolitan Region Development Authority. The Starbus Hybrid bus combines electric and CNG power and was first trialled in Delhi.
asia.nikkei.com