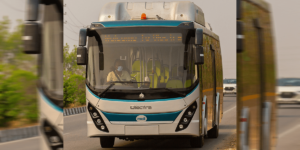 The enormous number of electric 12-metre buses are to be delivered within only twelve months. The contract period for the Mumbai buses spans a period of twelve years in which Olectra will also take over the maintenance of the vehicles.

The value of this order is Rs.3675 crores, which amounts to around 443 million euros. Evey Trans Private Limited (EVEY) has received the Letter of Award (LoA) from BEST. EVEY is to procure the 2,100 vehicles from Olectra. This is not only Olectra’s largest order to date, but is also said to be the biggest order for electric transport in India so far.

In Mumbai, a city with a population of around 27 million people, 40 electric buses from Olectra Greentech are already in operation. Olectra’s ability to quickly provide over two thousand buses within 12 months is also enabled by its technology partner, BYD, the world’s largest electric bus manufacturer. Although the exact type of bus, nor the provider of charging equipment have so far been revealed, the company’s K9 bus would fit the description– with its 12-metre length and a range of around 200 km on a single charge.

KV Pradeep, Chairman and Managing Director, Olectra Greentech Limited, said: “We feel happy to receive this biggest order from Brihanmumbai Electric Supply & Transport (BEST).” He extrapolated: “Running the largest Electric Bus fleet in India’s financial capital is a matter of pride. We will deliver the buses as per the schedule and will give the best commuting experience to the citizens of Mumbai.”

Established in 2000, Olectra Greentech Limited as part of MEIL Group, introduced electric buses in India in 2015. In June 2019, we reported that BYD was planning to open a second factory in India with its local joint venture with Olectra. Later the same year, we reported that Olectra and BYD were planning to increase their production capacity for electric buses in India from what was 2,000 to 5,000 per year. Olectra-BYD buses are already in operation, not only in Pune as mentioned above, but also in Hyderabad, Goa, Deharadun, Surat, Ahmedabad, Silvasa, and Nagpur.

Yoyo now in sharing use with Enjoy in Turin

RVK orders up to 100 H2 fuel cell buses for Cologne