Why walk when you can ride?

Tesla owners drove a Model Y and a Model X to the base camp of Mount Everest at an altitude of over 5,000 metres within five days after a journey of over 2,000 kilometres, partly through very rough terrain. Internal combustion cars have apparently not yet made it to this altitude due to the low […] 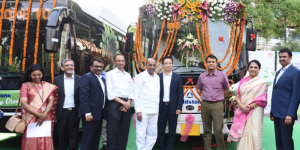 BYD and their JV partner Goldstone Infratech in India have revealed their first joint product, an electric minibus. The ‘eBuzz K6’ has been presented in Delhi and can carry 18 passengers over a range of 200 kilometres on one charge.

BYD announces more plug-in SUVs: After the Tang, the Chinese manufacturer wants to introduce two more plug-in hybrid SUVs in 2015 – the Song and the Yuan. Another SUV, the Ming, will be introduced later. Moreover, BYD wants to sell 15,000 units of its all-electric e6 to taxi companies this year and set up a car hiring service in Hong Kong with the same model.
bloomberg.com, transportevolved.com

5-Series GT plugs in: German auto motor und sport reports that due to high demand in the U.S. and China, BMW will definitely introduce a second generation of its 5-Series GT. A plug-in hybrid variant with an electric range of around 30 kilometres is supposedly also in the works.
auto-motor-und-sport.de (in German)

Behind the wheel of the Twizy Cargo: The tiny delivery concept has its perks, such as being able to whisk around traffic, park in the smallest spots and get a company noticed. The only drawback is the lack of side windows or a heater which makes driving it in autumn and winter “interesting”.
evfleetworld.co.uk

Seoul gears up for electric mobility: The South Korean capital plans to introduce 50,000 electric vehicles by 2018 and to establish 500 charging stations within the city. Furthermore, private operators of parking lots will receive 20 million won (about 18,000 dollars) for setting up charging points and EV buyers can enjoy up to 6 million won (5,500 dollars) in tax breaks.
koreaittimes.com

Used hybrids for Nepal: The Japanese company BP Trading wants to sell reconditioned hybrid vehicles in Nepal. However, so far the country does not allow the import of used cars at all. But in the wake of new policies pushing for lower emission cars, it might reconsider.
ekantipur.com

EVs to be strengthened in India: The Indian Ministry for Heavy Industries has forwarded a proposal for EV subsidies that could see the government spending 140 billion rupees (2.34bn USD) until 2020. If the cabinet agrees, Indian buyers could get up to 35% of the price difference between a conventional and an electric car, hybrids would get 25%. At the same time, Nissan has announced to offer the Leaf in India soon and is looking for partnerships with local infrastructure providers.
timesofindia.com (subsidies), hindustantimes.com (Nissan)

Hybrid Hyundai delayed: While the new Sonata model has already been launched, an updated hybrid version will have to wait until 2015. Until then, the current Hyundai Sonata Hybrid will stay on the market.
hybridcars.com, caranddriver.com

Lexus NX 300h now in the USA: Toyota’s luxury brand has just introduced their latest compact SUV to the States where it will be offered in two versions, the NX 200t conventional and the NX 300h. The latter is a hybrid with a split battery pack for better weight distribution.
greencarcongress.com

Himalayan EV uptake: The Nepalese Ministry for Transport (MoPIT) considers to lower the customs duties for the import of electric vehicles to zero. The policy, which is designed to promote electric mobility especially in public transport, is already at the Cabinet for approval.
thehimalayantimes.com

Tesla bests again: For the Total Quality Index (TQI), Strategic Vision asked 38,361 drivers about their experiences and matched them with reliability data. The title of ‘Best Model in Total Quality’ went to the Model S while Kia was honoured for its ‘Strategic Vision’ embodied in the Soul EV and Optima.
autoblog.com

BMW i3 in real-life test: Michael Specht, reporter at German Spiegel, actually bought the electric BMW and has been “testing” it in his daily life for months. He found fault with “impractical” back doors, a reflecting dashboard that makes the windscreen look “dirty” as well as the high price that pits the risk on the EV buying pioneers alone. Specht praises however, the silent and torque-full drive.
greencarreports.com, spiegel.de (German original)