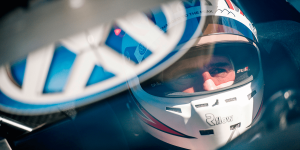 The VW I.D. R Pikes Peak has hit an all-time record at the legendary Pikes Peak hill climb. It was the first electric car to ever win the race ahead of all conventional race cars. A true coup for Volkswagen and their 500 kW strong lowlaying bully.

VW has followed its plan to present its electric supercar and has unwrapped the I.D. R Pikes Peak on Sunday with testing commencing today. The light racer is built for one purpose, or rather peak alone. 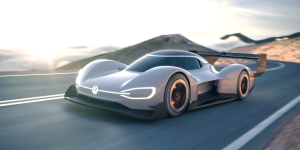 Coming Sunday, VW will be presenting the I.D. R Pikes Peak to the public, before the testing program begins a day later for the electric sports car. This was announced by VW, who also included a new image of the electric super car.

The German carmaker intends to introduce the newest member of its I.D. family (currently consisting of the I.D., the I.D. Crozz and the I.D. Buzz) before the year’s end. This message has been transmitted through a company video called “Preview 2018”.

VW e-scooter: The German carmaker is planning an electric trike dubbed City Surfer, Volkswagen CEO Martin Winterkorn said in an interview with German Bild. The LEV will weigh less than 20 kilos, have a range of about 20 kilometres and cost less than a 1,000 euros. Market entry is set for the second half of 2016. Meanwhile, Winterkorn confirmed that the rumoured 1,500 hp Bugatti will indeed be a hybrid (we reported).
bild.de (City Surfer, in German with pictures), themotorreport.com.au (Bugatti)

Audi A4 without e-tron? Audi presented the next-gen A4 for the first time but did not announce a PHEV as part of the motor line-up, even though media expected an A4 e-tron. German Heise Autos still believes a hybrid variant will come at a later date. First, the Audi Q5 PHEV will take the road.
puregreencars.com, heise.de (Q5, in German)

Mini Superleggera with i8 drive? Despite Mini denying production plans of its Superleggera concept, the rumour mill will not stop. Autocar reports that the classy convertible might be powered by a motor similar to that of the BMW i8 and expects a definite decision about production in November.
autocar.co.uk 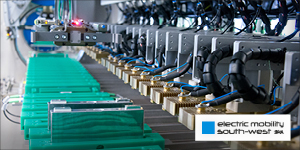 Optimised production of battery casings: The new project of the leading edge cluster Electric Mobility South-West “OptiFeLio” is dedicated to reducing production costs in the manufacturing of cell casings for pouch and prism cells. Already existing production methods are being upgraded.
e-mobilbw-sw.de

Hyundai’s hopes on hydrogen: Hyundai’s fuel cell manager Kim Sae Hoon sees the future in FCVs. He says fuel cell batteries can be incorporated into vehicles of all sizes because they are easily scaled and are thus more competitive. But the technology needs more time to penetrate the market.
nytimes.com

Reading tip: There will be a lot going in the world of electric mobility this weekend. The last two rounds of the Formula E will take place in London and megawatt cars will battle at the Pikes Peak International Hill Climb. Here, you can brush up on some of the basics.
electricautosport.com (Formula E), electricautosport.com (Pikes Peak)