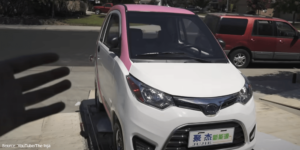 Be careful what you order online

When the US-American auto blogger ordered an electric sports car online from the online retailer Alibaba, he thought he found a great deal with a price of US$31,000 for the Qiantu K50. However, things did not go as hoped.

Extra range from Renault? At its local show in Paris, the French carmaker will present an improved Zoe, BFM TV reports. The new version is to double its range to 320 kilometres. Furthermore, Renault speaks of a novel electric concept, which will debut at the motor show also.
bfmtv.com (in French) via goingelectric.de; renault.com (electric concept, in French)

Chevy Bolt pricing: GM has issued the U.S. price for the Chevy Bolt EV. The economy electric car starts at 37,495 dollars before grants, meaning with all incentives applied it will be below 30,000 dollars. Those that require fast DC-charging will have to factor in another 750 bucks.
electrek.co, insideevs.com, greencarcongress.com

LeEco financing: 1.08bn dollars were collected in a new round of funding for the Chinese electric transport venture. Only recently, LeEco had announced an 1.8bn dollar investment in a new facitlity. There, up to 400,000 electric vehicles could be produced annually.
bloomberg.com

One out of ten: Qiantu Motor, a start-up owned by CH-Auto, has secured a production license for electric cars in China, Bloomberg learned. The Government in Beijing has reportedly limited the number of such allowances to only ten in the People’s Republic.
bloomberg.com

Tesla and SolarCity may not merge as quickly as planned. The EV maker faces four lawsuits from different investors. The first hearing is set for October, 18 and is thus likely to delay the merger.
electrek.co, teslarati.com