Hyperloop update: The project appears to move forward, as Hyperloop Transportation Technologies signed agreements with Cologne-based Oerlikon Leybold Vacuum and global engineering design firm Aecom. It exchange for their engineering know-how, the latter companies will have the option of purchasing stock options.
wired.com 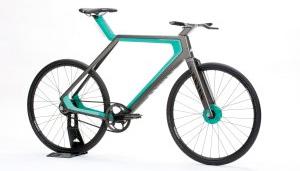 In a rush: Together with bike manufacturer Canyon, industry designer Florian Mayer has thought up a design study of an e-bike concept for urban cyclists called ‘Urban Rush.’ Its ‘e-boost technology’ is said to allow for more acceleration at traffic lights, minimizing the difference in speed between bike and cars during the acceleration phase.
technologicvehicles.com

Platinum alternative: Researchers at Rice University have improved a cost-effective approach to create metal oxide-induced graphene (MO-LIG). They are using direct laser scribing to embed various typed of metallic nanoparticles in graphene, which could therefore be an alternative to costly platinum in catalysts for i.e. fuel cells.
greencarcongress.com

Rare earth recycling: The U.S. Department of Energy’s Critical Materials Institute (CMI) has developed a recycling technology for rare earth materials. It is said to be able to extract more than 90 percent of neodymium, dysprosium and praseodymium from permanent magnets. U.S. Rare Earth is the first who will apply the technology.
hydrogenfuelnews.com

Hydrogen passé? Advances in battery technology might come very soon, Marcus Fendt of The Mobility House, Ian Robertson of BMW and Renault-Nissan-CEO Carlos Ghosn recently said independently of each other. Fendt believes that energy density could double in 2015 already, while Ghosn confirmed that more than 400 kilometers of range will be possible soon (we reported). According to recent reports, BMW is even rethinking its FCV strategy due to the latest advances in battery technology.
automobil-produktion.de (Fendt in German), autocar.co.uk (Robertson), dailykanban.com (Ghosn)

Supercap research: Researchers from Rice University have created flexible sheets of multilayer Graphene from a cheap polymer by burning it with a computer-controlled laser. The laser-induced graphene (LIG) could be used to make high-performance supercapacitators.
rice.edu, azom.com

Increased separator production: Teijin will open a second production line for LIELSORT, a separator for Li-ion batteries, to meet increasing demand. Operations are set to start next week and will double production capacities.
greencarcongress.com, teijin.com

Battery traction for trains: Toshiba has delivered its Li-ion battery traction energy storage system (TESS) to Tobu Railway. TESS stores traction energy from decelerating trains as they enter a station and releases it when trains leave the station. The system is planned to go into operation later this December.
greencarcongress.com

Most clicked link on Thursday was the making of Nissan Leaf batteries in the British Sunderland plant, brought to us by Inside EVs.
insideevs.com

V2Home: Nissan started testing its ‘Leaf to Home’ system, designed to help grids manage peaks in demand. The tests are being conducted by ENERES together with selected Nissan dealerships in Japan. There, the Leaf battery powers lighting systems during opening hours.
greencarcongress.com, nissan-global.com

Off-road wheel chair: The HexHog resembles a cart but has six wheels. The electric wheel chair can turn on the spot, while its flexible chassis enables easy access and ensures all six wheels to touch ground, no matter the terrain.
theglobeandmail.com (video)

Platinum substitute: Researchers from Rice University created a hybrid material in the form of flakes containing graphene quantum dots (GQDs) and graphene platelets. Used as a catalyst in fuel cells, the new formulation can outperform platinum in both current density and value.
greencarcongress.com

Most clicked link on Thursday was the news that Sparta hast sold more than 1,000 speed pedelecs in the Netherlands already.
bike-eu.com

Spare parts for Fisker Karma: Owners of the 2012 luxury EV can soon get their cars fixed again if needed, Frank Qi, Coordinator at Wanxiang America, announced. The latter bought out Fisker in a bankruptcy auction in February. It also looks as though Wanxiang is moving closer to resuming production of the Karma.
greencarreports.com

Tesla developing a graphene enhanced battery? Nothing has been confirmed, but a report from Chinese news agency Xinhua claims the carmaker is working on just that. A graphene-enhanced Li-ion battery could extend the range of i.e. the Model S to 500 miles and could allow for even faster charging.
graphene-info.com, gas2.org

New cathode material for Lithium-sulphur batteries: Scientist at Rice University in Texas, USA, developed a hierarchical nanocomposite material of graphene nanoribbons and polyaniline and sulphur. The material could reduce capacity decay in the batteries.
greencarcongress.com

Most clicked link on Tuesday was the CNBC report on how Amsterdam is promoting the use of electric vehicles and its 2,000 public charge points.
cnbc.com

Buyers of the upcoming Prius IV will have the choice between a low-cost nickel-metal hydride or Li-ion battery for improved electric-only driving range. Furthermore, Toyota ponders to offer its hybrid flagship with AWD. The launch only recently was pushed back to December 2015.
autonews.com

Characterised battery anodes: Scientists at Rice University and Lawrence Livermore National Laboratory created a theoretical model able to predict the performance of carbon based anodes. The model is based on intrinsic characteristics of anode materials and how minor changes in the structure, chemistry and shape of an anode can influence the battery’s capacity, voltage and energy density.
news.rice.edu via greencarcongress.com

Most clicked link on Monday was the bad news of the unfortunate death of the Tesla thief who crashed the stolen Model S on July 4th.
green.autoblog.com