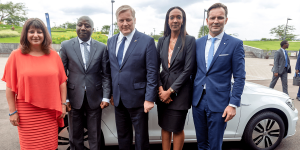 The government of Rwanda has announced that they will be issuing national policy guidelines to eliminate fossil-fuelled two-wheelers from its roads.  This is part of a broader electrification strategy aimed at comprehensively decarbonizing the East African country’s transport sector.

Uber with Tesla in Madrid: The taxi service launched a Tesla fleet with licensed drivers in Madrid. The 20-strong electric fleet was introduced after the Spanish city banned Uber until March because of its unlicensed drivers. Its expansion is restricted still.
theverge.com

Upcycling: Austrian operator A1 has opened its 25th electric vehicle charging station reutilising a public pay phone booth in the centre of Herzogenburg. E-cars, e-scooters or e-bikes can be recharged for free.
telecompaper.com

VW in Rwanda: Volkswagen signed a MOU with the Rwanda Development Board to build a production plant in the country. The plan includes a concept for app-based mobility solutions such as car sharing and ride hailing with electric cars in the mid-term.
rnanews.com